The Guardians and Renegades must work together to defend themselves against metal-eating alien spiders. 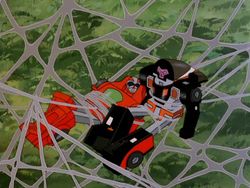 Out in space, the Renegades attempt to spy on the Guardians in their Command Center, but find their efforts blocked by the test run of UNECOM's new Enigma Device signal-scrambler. Determined to obtain the device for himself, Cy-Kill Astrobeams Pincher in, and he and the Monster GoBot proceed to launch an attack on the Command Center, tearing their way inside, pummelling the surprised Guardians, and speeding back to Thruster with the captured Enigma Device. To keep their acquisition of the device a secret, the Renegades then turn all their firepower on the Command Center to destroy the Guardians, who try to take cover within a meteor shower. The meteor impacts badly damage both the Command Center and Thruster, and the two vessels crash-land on a nearby jungle planet, tearing through a colossal spiderweb on the way down. 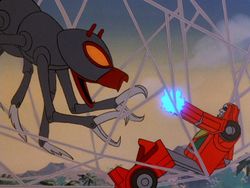 While Scooter tries to repair the damaged Command Center, the Guardians begin searching the area for the Renegades to recover the Enigma Device, and quickly discover that the planet's powerful magnetic field keeps them from flying. Turbo finds the Enigma Device, thrown from Thruster in the crash, but Crasher intercepts him, snatches the device, and speeds off. When Turbo gives chase, both he and Crasher stumble into another of the huge spiderwebs and find themselves staring into the jaws of the creatures that wove them: colossal, metal-eating, mechanical spiders! Discovering that the web saps their laser power, Turbo radios the other Guardians for help, only to find that the spiders have attacked the crash site as well! Unable to move, Turbo calls out to Crasher to change form and use her blazing hot exhaust to burn through the web... but once she has freed herself, she simply sits back to watch him meet his end. Fortunately, back at the crash site, after Leader-1 saves Cy-Kill from the spiders, the two sides agree to a truce until they can get off the planet. Cy-Kill and Leader-1 join forces to come to Turbo's rescue, and Cy-Kill takes the Enigma Device from Crasher and returns it to the Guardians, as agreed... but as Crasher grumbles, he takes her aside and assures her he has a plan... 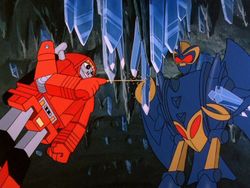 Meanwhile, the spiders web up Thruster and start dragging it off. Leaving Scooter, Nick, and A.J. in the safety of the Command Center, protected by a forcefield, Matt takes Dozer, Cop-Tur, and Pincher to enact a plan of his own. Fighting their way through the spiders, they make it to a nearby waterfall, where Dozer uses his prodigious strength to shatter the cliff wall, bringing the entire natural reservoir above crashing down in a torrential flood. All the spiders are washed away, buying the uneasy allies some time to figure out what to do next. Scooter's sensors detect a magnetic-free zone nearby from which they may be able to take off, so he, Nick, and Pincher head off to investigate; Pincher covertly radios Cy-Kill to inform him of the discovery, and receives orders to eliminate the Guardian and the human. On the way, the trio nearly fall prey to another herd of spiders, but Scooter uses his holograms to disguise the three of them as one giant spider. Using the illusion, they hide among the spiders and follow them back to the mountain cave that is their nest, which turns out to be the magnetic-free zone. The two GoBots quickly harvest some of the crystalline stalactites that generate the magnetic inversion effect, but when one of the spiders spots them, Pincher flees with the crystals and collapses the cave entrance, trapping Nick and Scooter inside. 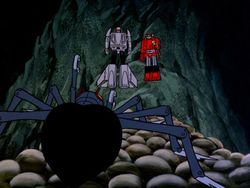 Receiving word that Pincher has accomplished his mission, Cy-Kill drops all pretense and attacks Turbo, stealing back the Enigma Device. Cy-Kill and Crasher burn rubber back to Thruster, where Pincher joins them, but just as the Monster GoBot hands over a clutch of crystals, another spider appears and ensnares him in a stream of web. With the crystals installed inside Thruster, the ship successfully takes off and Cy-Kill elects to abandon Pincher to his fate. Fortunately, the Guardians are not so callous; Dozer saves Pincher, then takes him captive and uses the last of his crystals to get the Command Center airborne. Leader-1, meanwhile, speeds to Nick and Scooter's rescue, saving them just before they become dinner for the baby spiders in the nest, after which the Command Center blasts the mountain open so they can easily escape. Leader-1 orders the Command Center to go to hyperdrive to pursue the Renegades, but an alarmed Pincher explains that during the repairs, Cop-Tur sabotaged it to explode upon activation. In his panicking flailing, Pincher throws the hyperdrive switch, but quickly finds he will be spared an explosive demise when the Astrobeam reverses and he teleports out. As it turns out, though, no Guardians will be exploding today: Turbo already found Cop-Tur's bomb and swapped it out for the Enigma Device! As such, when the Renegades try to activate what they believe to be the Enigma Device aboard Thruster, it blows up in their faces! Shamed and defeated, the villains limp away under cover of their stealth device, and the Guardians return home with the Enigma Device safe in their hands. 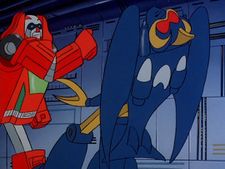 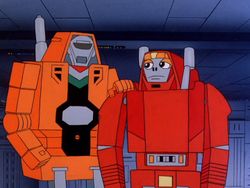 Scooter did the "stranded on an alien planet of dangerous creatures" plot two episodes ago, and he's so very tired. 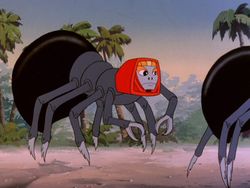 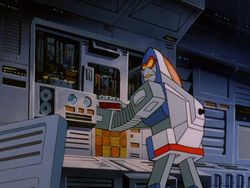 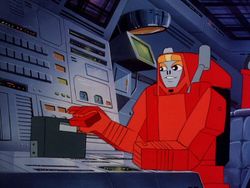 2014 — Challenge of the GoBots — The Series, Volume One (Warner Archive Collection)