The GoBot Who Cried Renegade

Scooter creates a new Renegade detector, but its effectiveness is called into question. 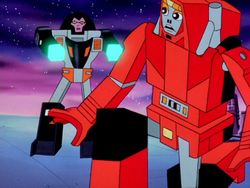 The Guardians and their human friends are spending their downtime cruising around space, with everyone except Turbo enjoying the peace and quiet. Turbo soon gets his wish for excitement, however, when a distress call comes in from Rest-Q, requesting aid at a Guardian industrial outpost that has been struck by the Renegades—the latest in a series of successful attacks the villains have been able to perpetrate thanks to their stealth device. The Guardians speed to the rescue, and while Leader-1 and Turbo take the fight to the Renegades, Scooter goes to the aid of Rest-Q, who has been injured by Crasher while trying to help the wounded Heat Seeker. Unfortunately, Crasher is still hanging around when Scooter arrives; she tosses the little GoBot into a nearby lake, and blasts a cluster of live electrical wires down around him. Leader-1 and Turbo break off their battle to come to help Scooter, blasting the wires away before they can hit the water, and the Renegades escape. 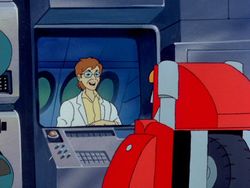 A frustrated Zeemon demands the Guardians find a solution to the spate of Renegade attacks. Reasoning that the Renegades cannot use their stealth device while their weapons are operational, Leader-1's best solution is to have Scooter amplify the Guardians' detection equipment so they can at least detect the Renegades as they attack, rather than after. Scooter contacts a human scientist friend of his named Billy for some help on the project, and Billy transmits through the specs for a new experimental system he is working on. Unfortunately, the Renegades are monitoring the transmission and get a hold of the specs too; once Scooter has completed his detector, they are able to feed it false information, making the Guardians think they are about to launch an attack on GoBotron's Spa Moon. Leader-1 alerts the moon's overseer Spay-C and calls for a full evacuation... but when no Renegade threat materializes, Zeemon is less than pleased to have had his visit to the moon spoiled and warns against trusting Scooter's untested device so blindly. Scooter is depressed that his new device has apparently failed, only to then be tricked by another phony alert warning of an attack on the Moon of Knowledge. Assured by Scooter that the alert has been triple-checked, Leader-1 again sends a warning to the moon, throwing it into a panic. But of course, no attack comes, and a furious Zeemon demotes Leader-1's team to cargo hauling duty for a month. 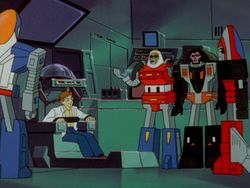 The dejected Scooter contacts Billy for advice, but while he is on the line with him, the Renegades, seeking to tie up loose ends, attack Billy's lab and take him hostage. Scooter tries to tell the other Guardians, but after two false alarms, they don't believe him, so he takes a shuttle and heads for Earth on his own. Disguising his craft with a hologram of a cloud, Scooter tails the Renegades' Thruster to their secret underground base, where Billy is strapped into the mind-reading Brainstormer so the Renegades can pillage his mind of all his scientific knowledge. Fortunately, the thoughts at the forefront of Billy's teenage mind—like girls, chores, and pimple cream—stymie the machine long enough for Scooter navigate the tunnels that lead into the base. Scooter blasts Billy free of the Brainstormer, and the pair flee into the tunnels, with Cy-Kill and Crasher hot on their heels. The two Renegades think they have their quarry cornered in a dead end, but soon find that they have once again been tricked by Scooter's trustworthy holograms as the genuine articles zoom past them while they are distracted. Billy taunts Cy-Kill into firing after them, and the Renegade leader's blast triggers a cave-in that buries him and Crasher while Scooter and his pal beat retreat. 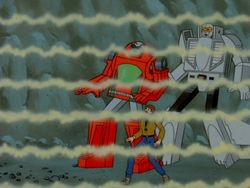 Meanwhile, Leader-1 discovers Scooter's absence and deduces that he has gone to Billy's lab. The Command Center makes its way to Earth, where the Guardians and human learn about the Renegade attack and discover that Scooter was telling the truth. Convinced by this to use his detector again, the heroes are able to locate the Renegades base and arrive just after Cy-Kill and Crasher have dug themselves out. Nick and A.J. stay with the Command Center while Leader-1, Turbo, and Matt head into the tunnels. Though surprised by their appearance, Cy-Kill isn't one to let an opportunity pass him by, and pulls a switch that drops them into a pit surrounded by an electromagnetic field that neutralizes their blasters and jets. Worse yet, a deadly energy grid begins to close in around them! 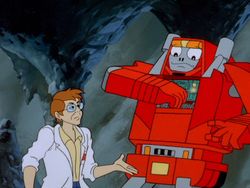 Elsewhere in the tunnels, Scooter and Billy have gotten thoroughly lost. Through the rock, they hear the sound of their friends' voices, and manage to chip a hole through the wall, into the pit, big enough for Billy to fit through. Scooter removes a circuit board from his body and Billy takes it through the hole to Leader-1, who follows Scooter's directions to combine it with his own propulsion systems to generate enough energy to counteract the electromagnetic pulse. The gamble works, and the Guardians blast their way out of the energy grid. The Renegades start to flee in Thruster, but the Guardians trick them by pursuing without the Command Center. Thinking the Guardians have been caught without their ship, Cy-Kill turns Thruster to open fire on them, only to then be blindsided when Nick and A.J. bring the Command Center into action. The Renegades quickly trigger their stealth device and make a hasty escape, while the Guardians celebrate their victory and apologize to Scooter for not trusting him.

"I love a moving target!"

"Crasher, I believe the Brainstormer will work just as well on a disconnected brain as on one that is still in use!"
"Nyaha-haha-ha-ha-haaaaaa! Let's try!" 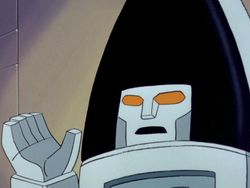 "This is the only time I'm female but you know what Transformers fans are like." 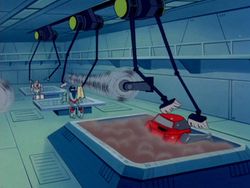 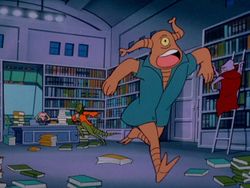 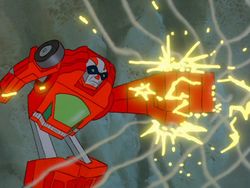