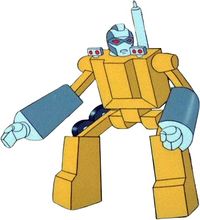 Steamer is a Renegade. Maybe. He's not so sure.

Onboard Roguestar, Steamer watched Doctor Go make the final preparations to an upgraded Astro-Beam with his fellow Renegades. However before he can finish the beam's existing 48-hour limit expires and he vanishes. A furious Cy-Kill decides to steal the prototype and blueprints for Guardians' latest version instead and sets off with Crasher, Cop-Tur and Steamer to take it from the Astro-Science Center on GoBotron. Crasher and Cop-Tur easily overpower Night Ranger and Path Finder while Steamer grabs Sparky. She doesn't have the clearance to open the safe containing the plans so Cy-Kill orders Steamer to take Sparky outside and kill her. Once there, Steamer lets the Guardian go. Meanwhile his fellow Renegades have the prototype for the new Astro-Beam and they all leave, with the rest none the wiser about Sparky's survival. They head to Earth, where Cy-Kill plans to harness the hydroelectricity at Hoover Dam. He assigns Steamer to destroy Boulder City to make way for a staging ground. Steamer is given a disc blueprints of the Command Centre and a fleet of radio-controlled vehicles but quits, seeing the mission as needlessly harming humans. Cy-Kill sets Crasher and Cop-Tur on him but Steamer is able to escape. He turns to the Guardians, telling them of Cy-Kill's plans. Steamer takes Leader-1, Turbo, Scooter and Nick to the city but they are ambushed by the Renegades. In the battle Steamer saves Nick from harm, which shows Leader-1 he's genuine - though Turbo remains to be convinced. After realising Steamer has joined up with the Guardians, Cy-Kill begins to stir the pot, removing the remote control devices from the vehicles so Steamer looks dishonest when they're checked. Turbo again questions where Steamer's loyalties really lie and finds the disc. This convinces everyone he's really working for the Renegades still. They try to capture Steamer but he escapes, going back to investigate the vehicles again. To his horror Cy-Kill has reactivated them and he heads back to the Command Center again. After some stubbornness even Turbo realises he's telling the truth. Steamer helps the Guardians hold off the machines and then deprives Cy-Kill of his controller, ending the threat to Boulder City. Turbo apologizes to both Steamer and Nick, and Steamer is welcomed into the fold. Steamer's Defection