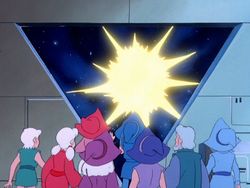 With only a minute left until Tri-Ceti is destroyed by the Guardians' antimatter detonators, Scooter is able to detect a small weak spot in the Tramulet force field keeping them trapped on the doomed planet, an unforseen side-effect of the amplifier Cy-Kill is using to magnify the Tramulet's power. The Command Center is able to escape through the fluctuating portal, but the Trindle ark fails to make it through on the first try. With literal seconds to spare, the portal opens again and the Trindles make it out just as Tri-Ceti explodes.

Believing the Guardians and Trindles destroyed, the Renegades set course for Earth, where Cy-Kill surrounds UNECOM headquarters with a forcefield that—thanks to the amplifier's "somnalizer" component—sends all the humans within the base to sleep. The Guardians follow their enemies, accompanied by Trevor and Troilene; the two young Trindles are determined to reclaim the sacred Tramulet before they begin searching for a new planet for their race, and have been provided with a magic ring by the Trindle elders to help locate it. Unfortunately, they are quickly detected by the Renegades upon arrival, and Trevor and Troilene soon find themselves being hounded by Crasher and Cop-Tur across a golf course. The two Trindles dive into a water hazard, causing Crasher and Cop-Tur to collide with one another, and the two wounded Renegades elect to retreat rather than fight on when the Guardians arrive to aid their friends. 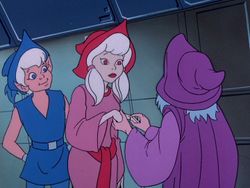 Back at UNECOM headquarters, Cy-Kill links the amplifier up to the base's satellite network in order to project localized Tramulet fields all around the world. Using these, he traps key world leaders in sleep-inducing forcefields and declares himself the ruler of the planet. Presently, a poorly-disguised Matt and A.J. arrive at the base, hauling a large statue of Cy-Kill that they claim is a gift from the people of Earth. Cy-Kill is not fooled by the obvious ruse, believing the Guardians to be lurking inside the statue, but plays along, deactivating the forcefield around the base so that he and the Renegades can blast the statue and its occupants to bits. But it turns out Cy-Kill has over-thought the situation: the Guardians aren't inside the statue at all, but are simply waiting nearby, and come zooming into the base once the field is down! As the UNECOM staff begin waking up, the Renegades are quickly overpowered; Matt tries to snatch the Tramulent from around Cy-Kill's neck, but only manages to grab two of its three pieces before the Renegades withdraw. 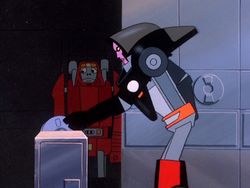 The Renegades take refuge in a city sewer to wait until the heat is off before returning to Thruster, but they are soon located by the Guardians with the help of Troilene's magic ring, which tracks the final Tramulet piece. Under Guardian fire, the villains make a break for the dump in which they have concealed Thruster, and managed to blast off with the Tramulet piece still in their possession. Both sides are unaware that Scooter has stowed away on Thruster, using his holograms to disguise himself as a computer bank, but once Leader-1 figures it out, he take off after the craft. Scooter, meanwhile, narrowly avoids being discovered by Crasher, then, while the Renegades are distracted by Leader-1's pursuit, simply runs onto the bridge and snatches the Tramulent piece from around Cy-Kill's neck. In attempting to get away from Crasher and Cop-Tur, Scooter accidentally blows himself out the ship's airlock, and drops the Tramulet when the Renegades blast him in mid-fall. Leader-1 saves his comrade from a nasty tumble, but it appears both the Tramulet and the Renegades are lost, as Thruster's stealth device activates and the ship fades from view. But it turns out the Tramulet stone has become lodged in Thruster's intake vent, and its glow allows the Guardians to spot and recover it before Thruster gets away.

Using the power of the reunited Tramulet together with Cy-Kill's amplifier, the Trindle elders are able to reintegrate the scattered pieces of their destroyed homeworld, restoring Tri-Ceti and allowing their race to return home. The Guardians further modify the amplifier to fix the weak spot, allowing the Trindles to use it to surround their entire world with the force field, protecting against further attacks. The Guardians bid their new friends farewell... but Cy-Kill watches from afar, and vows to return! 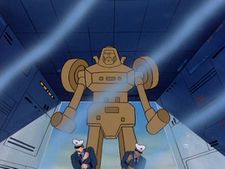 "How about a chopped Trindle salad, Crasher?"
"What a delicious idea!"

"Finally! A new weapon that performs as advertised!"

"What do the Guardians take me for, an egomaniacal dimwit?!" 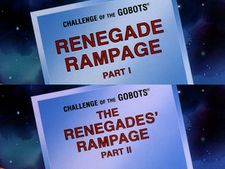 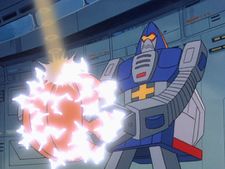 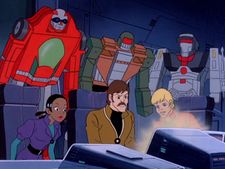 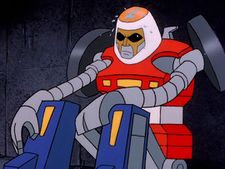 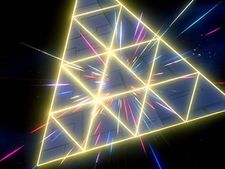