The invention of the Go-Bot has proved a benefit to humanity, but what happens when these incredible machines begin to question the purpose behind their existence? 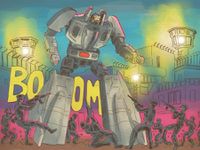 Since the invention of the first Go-Bots, human society has permanently changed; originally a solution to the parking crisis, the invention of a vehicle who could walk with their drivers to a destination paved the way for later advances… culminating in the development of the first generation of self-aware fighter jets, who even now take the lead on a hostage rescue mission. Weapons fire downs one of them, though, and so pilot Nick Burns takes drastic action by swooping directly into the enemy compound, transforming his partner Leader-1 as he does so. Authorized to use lethal force, the robotic jet easily overwhelms the enemy forces and uses his prodigious firepower to blast open the cell door containing the hostages.

Elsewhere, Scooter drives his owner, college student A.J. to her "Go-Botics" lecture, delivered by Professor Braxis. The professor invites her mechanical companion to the lecture as a guest; using Scooter to introduce his class to the subject, he explains the origin of the Go-Bots and how each of them have distinct artificial personalities, before turning his attention to the subject of the most popular sport in the world today, Go-Bot racing. On a speedway, hotshot driver Matt Hunter and his partner Turbo take the lead on the racecourse and win, thanks to some quick-thinking shapeshifting on Turbo's part. In the winner's circle, Hunter's egotism grates on Turbo; that night, however, Hunter is approached by the mysterious T. Coriander Banks, who has a "business proposal" for the cocky racer, and the two racers follow Banks's limousine to a run-down industrial district. After Banks' limousine reveals himself as Stretch, the pair receive a firsthand demonstration of a new sport taking shape, far from the prying eyes of the law - the illegal bloodsport of Go-Bot pit fighting. The current champion is eager for a new challenge after murdering the last contender, and is eager to take on Turbo in the ring… but when Matt refuses to enter Turbo, he's grabbed and thrown into the ring by the bloodthirsty fans in the hopes that the need to protect his owner will goad Turbo into action. Matt asserts that the Go-Bot's G-chip won't let him harm humans, but before the Go-Bot can test that strategy, Turbo leaps to his defense. The gladiator wonders why a Go-Bot would come to the defense of a human; Turbo retorts that his foe isn't much different, as he fights for their amusement and then leaves, taking Hunter to safety. Later that night, Matt returns, bringing the police to the scene. The cops aren't inclined to believe Matt's accusations until they discover the remains of a mangled Go-Bot and the bodies of the arena crowd. Someone, or something, has massacred scores of humans… and Hunter and Turbo immediately identify the perpetrator: "Cy-Kill", the gladiator from Banks' fights. 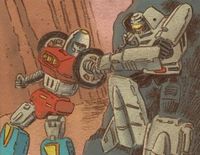 At the Pentagon, Nick and Leader-1 report to the Command Center for a briefing regarding their next mission: taking out a cell of runaway Go-Bots. When Go-Bots go rogue normally they're rounded up and deactivated, but this latest group has managed to evade capture by human authorities and is holed up somewhere along Route 66. Nick meets with the latest victim of their attacks, a gas station worker who relates that he was assaulted by one of them, a race car who took offense when the worker asked to see her "master." Retorting that she had no master, the car transformed to knock him out; when he came to, the robots had taken all of the fuel, money and ammunition. Out in the desert, Leader-1 and Nick perform a flyby, and are about to give up and call it a day when they spy an unmanned convoy of vehicles: the "renegades" that they'd been warned about. Before they can intercept the vehicles, however, they're intercepted by [[Cop-Tur], and though Leader-1 blows him out of the sky, the dogfight prevents him from catching Cy-Kill, who's already escaped into the canyons below. Leader-1 springs an ambush on the bike-bot, but is outmatched. Cy-Kill takes advantage of a lull in the fighting to expound on his plan; Go-Bots are naturally superior to humans, and thus it stands to reason that they should eventually take charge of civilization. To do so, of course, they'd need the nuclear launch code - launch codes that Leader-1 already has in his brain. Though Leader-1 attempts to talk Cy-Kill down the Renegade leader has other plans, and orders his new subordinates to pin down their enemy to extract those codes. Tank does so easily, but Cy-Kill tells his followers that the battle has forced his hand; now that the Pentagon is aware of their existence, they won't be content to let the rogue robots live in the desert and so this is their only opportunity to conquer the world.

Back in the city A.J. has been invited to dinner by Braxis, who's pleased with her progress in the course and her intuitive knowledge of Go-Botics. In fact, Braxis tells her, he has a Go-Bot of his own, and invites her into the basement to meet him: the monstrous Vamp. The ghoulish Go-Bot advances on the helpless A.J. before Scooter intervenes, and wraps his hand around Braxis' neck as the scientist pleads for mercy. Outside is a scene of pure chaos as Go-Bots of all shapes and sizes run amok in the street. Scooter informs his erstwhile master of the situation: the deactivation of the Asimov Laws responsible for modulating the behaviours of Go-Bots have allowed Go-Bots across the world to rise up and turn on their former owners. Gazing out on the revolution, A.J. nervously asks Scooter if he's going to hurt her, as the red Go-Bot's hand clenches into a fist...

Characters in italic text appear only in flashbacks.
(Numbers indicate order of appearance.)

"Just remember one thing. You don't ride us... we ride you."

"Our whole purpose is to serve, Cy-Kill. If Go-Bots took over the world, what then?"
"We nuke them. We herd up the survivors, cage them, put them in storage. I'm sure they're good for something."

—Leader-1 and Cy-Kill have their first encounter