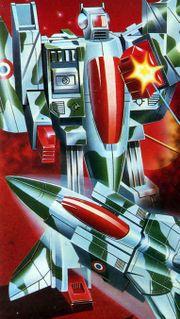 Spy-Eye is a Guardian. He is capable of flying into Renegade facilities and back out again without ever being spotted.

He does not seem to get on well with Vamp. 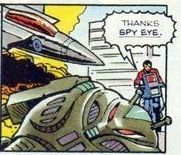 Everything he did in the Northern hemisphere..

The giant-sized Vamp was attacking a city on Earth when Throttle decided to distract the enemy with the help of a hapless human civilian. To his credit this worked, giving Spy-Eye the opening needed to take her out. Challenge of the GoBots - A Robo Machine Product

...and everything he did in the Southern hemisphere.

Spy-Eye battled Vamp in the skies above a battle between the Friendly Machine Men and Enemy Machine Men, outmanoeuvring his opponent by shifting to robot mode and kicking her out of the air. Challenge of the Machine Men

During the Diaspora, Spy-Eye was dispatched to Level 72 along with an assortment of Guardians and Renegades. Cultural Appropriation

Operating as a scout, Spy-Eye spotted Anya Turgenova after the Renegades captured her to learn the secrets of the Space Hawk project. She was being transported to a secret Renegade base on the dark side of the moon. Unfortunately, the Renegades had allowed Spy-Eye to spy them, in order to lure the Guardians into a trap. The Hawks of Space Part 1 Spy-Eye was one of the Guardians who fell under Renegade control when Doctor Braxis's new Destabilizer Cannons also subverted his will. He acted as a lookout with Ace at the captured UNECOM base. Once Braxis Twice Shy Part 2 When the Guardians and Renegades participated in a basketball game for the fate of Earth, Cy-Kill naturally cheated. Once Leader-1 realized Cy-Kill was remotely controlling the basketball via Thruster, he summoned Wrong Way and Spy-Eye from Gobotron using the Astro Beam. As the game continued, Spy-Eye and Wrong Way sneaked aboard the Thruster. They located Doctor Go and destroyed the Naismith Radiation Generator. Double Dribble

As Sideways and Gong manipulated quantum strings to tie together two universal streams, the Decepticons staged an all-out assault on Guardian City on Earth. In defense of the base, Spy-Eye was destroyed fighting Starscream alongside Ace and Royal-T. Echoes and Fragments 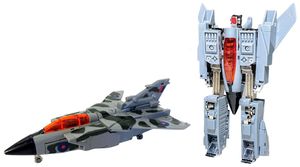 Spy-Eye was released by Tonka in the third series of GoBots, and converts from robot to Panavia Tornado GR1 jet fighter in 8 steps. As part of the final round of Super GoBots, Spy-Eye was designed by Bandai specifically for the Western markets at Tonka's behest and was never issued in Japan. Like all of the third series Super GoBots Spy-Eye is one of the harder GoBots figures to find. Sadly the figure suffers from several parts that work loose easily, including the shoulders, hips (though the wings take the weight in robot mode) and the under-cockpit halves that form the outsides of the chest. As the figure is top heavy the small feet Spy-Eye has can make him difficult to balance. Much of the camouflage comes from stickers included with the figure. 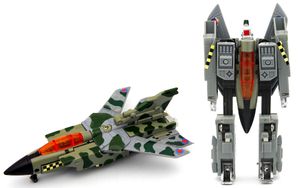 The European release of Spy-Eye significantly improves the look of the figure with further stickers. It is also much easier to find than the American version.