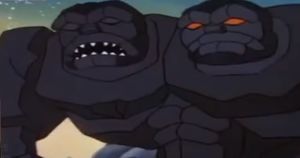 Sticks'n'Stones is a Rock Lord from the planet Quartex. He is on the side of evil and fights as part of Magmar's army. Sticks'n'Stones has two heads and these heads are constantly arguing with each other. Neither of his heads are among the more intelligent of the Rock Lords. Despite their differences both sides of his personality are devoted to the evil Rock Lord cause and arguments usually involve simple put-downs and how best to carry out Magmar's orders.

Sticks'n'Stones was a member of Magmer's evil Rock Lord army. He was present when the Renegades made first contact with Quartex, helping to defeat Boulder's good Rock Lord forces. He took part in the later battle between the combined forces of Boulder's army and the Guardians. Following their defeat, along with the Renegades' departure from Quartex, he retreated with Magmar and the rest of his army. GoBots: Battle of the Rock Lords 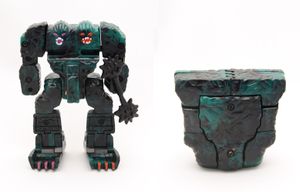 Rock Type - Anthracite and Magnetite: a dangerous combination of minerals that causes sparks

His accessory is the Cactus Club and Double Duty Mace.