Robot Helicopter, sometimes known as Helicopter Wincher, is a Renegade. 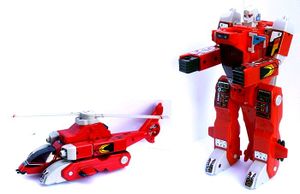 Robot Helicopter was released by Bandai in Robo Machine, and converts from robot to helicopter. The toy was a repackaging of JetHeli from Zenmai Kahen Winch Robo. It features a electric motor and working winch in vehicle mode; the figure can also 'walk' in robot mode, though it's more of a judder thanks to the mechanisms that resemble pistons pushing against a flat surface. Robot Helicopter is effectively an oversized version of the same mould used for Twister with a fully motorised winch gimmick and walking action; it is often mistaken for a European version of Twister but is considerably larger Though weirdly the fists of the robot barely retract in robot mode when they completely retract in the smaller version, while the shoulders are a lot less articulated. As the arms don't feature any of the extra mechanics needed for the toy's increased functions this was presumably a cost-cutting measure. 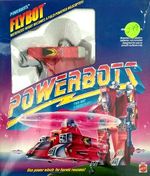