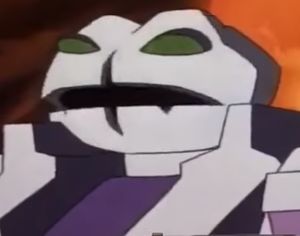 Crackpot is a Rock Lord from the planet Quartex. He is on the side of good and is part of Boulder's forces. Crackpot has a slightly goofy personality and is often given a hard time by his fellow Rock lords for some of his crazy ideas. Despite this he is well respected and often has good ideas when problems arise.

Crackpot was part of Boulder's good Rock Lord army. He was present when Boulder and his forces planned to trap Magmar and his evil Rock Lords in a canyon, a plan which was interrupted by the arrival of the Renegades. He retreated with Boulder's forces and was present when Nuggit brought Leader-1 and his Guardians to meet Boulder. Teaming up with the Guardians he took part in the later battle between the combined forces of the good Rock Lords and the Guardians, against the evil Rock Lords and the Renegades. Following the defeat of Magmar, and the Renegades' departure from Quartex, he remained with Boulder's army.GoBots: Battle of the Rock Lords 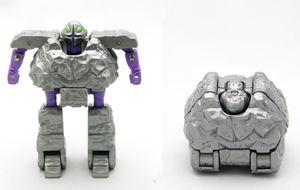 His accessory is the Magnetic Pulse Gun