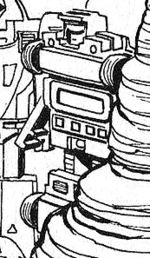 Pow Wow is a fearless Renegade suited for undercover work. He does collide with other Renegades a lot, though.

When Leader-1 prepared to attack the giant lens the Renegades were using to boil Earth's oceans Cy-Kill dispatched Pow-Wow and Crasher to stop the Guardian. However, he nipped between them and the pair collided.The Sea Vaporiser He was later given a second chance to impress when Cy-Kill used a giant magnet to bring the Command Center down on Finterland. Pow-Wow attempted to blast Scooter, but his beams were blocked by Sky Fly. He then joined Odd Ball in an attack on Beamer but once again their prey slipped through, leaving Pow-Wow to once again crashed into a team-mate. Ambush in Space He joined Cy-Kill and Odd Ball in chasing after Sky Fly after he wrecked the Renegades' Meteor Control Dome. While he didn't crash into anyone he did retreat on Thruster with the rest of the Renegades after Leader-1 tipped a pile of meteors onto them.The Meteor Shower 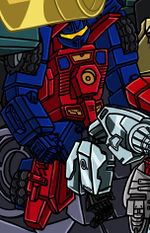 During the Diaspora, Pow Wow was dispatched to Level 29 along with an assortment of Guardians and Renegades. Cultural Appropriation

Pow Wow was a member of the Instigation Mini-Con Team along with Odd Ball and Breez. Hailing from an Aurex universal stream, the trio were marooned in the Offworlder section of Axiom Nexus. When Cy-Kill went recruiting for the Renegades, the Mini-Cons eagerly signed up for his cause. Cy-Kill had them outfitted with traditional GoBot features such as hand-blasters and flight systems before returning to his Gargent reality. Cy-Kill considered Pow Wow utterly fearless and suited for undercover work, possibly with the guidance of Snoop. Renegade Rhetoric Back on Level 1, Pow Wow and the new Renegades joined the fight against the Guardians upon Cy-Kill's triumphant return. They eagerly took the fight to the newest Guardian Academy graduates. Opportunity Knocks Part 2 In an evaluation of his new extra-dimensional troopers, Cy-Kill observed that Pow Wow and Breez still had a tendency to stick together, but had otherwise integrated well into the larger Renegade forces. One Born Every Minute Pow Wow was serving Fitor on-board Rogue Star when the Renegades assaulted the tri-planet alliance ceremony on Quartex. Initially successful with a blockade of the planet thanks to the asteroid belt, a united front of UNECOM forces and Guardian Command Centers eventually proved too much for Rogue Star. Pow Wow was last heard declaring they were being boarded when Cy-Kill's connection to Rogue Star cut out. Combiner Wars Part 2 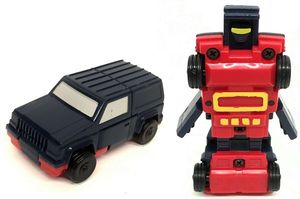 Pow Wow was one of the few GoBots toys designed by Tonka and converts from robot to Jeep Cherokee 4x4 in 5 steps. The toy was available at Wendy's restaurants, being available for 99¢ with any other purchase. The figure was never released outside of North America. Pow Wow's arms can only move parallel to the robot's body, and either they come out of his hips or his shoulders are gigantic.