Hi-Way is a lost GoBot whose deep-space expedition missed a sizable portion of the Guardian/Renegade conflict. Upon his return to GoBotron, Hi-Way joined the Guardians, but not all of his crew felt the same. His leadership abilities are perhaps suspect. 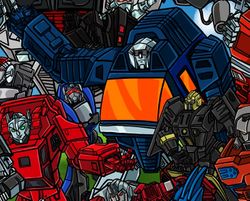 During the Diaspora, Hi-Way was dispatched to Level 29 along with an assortment of Guardians and Renegades. Cultural Appropriation

Shortly after the catastrophe that led GoBeings to evolve into the mechanical GoBots, Hi-Way left GoBotron as captain of a deep space exploration mission with his crew of Apollo, Decker Decker, Jack Attack, and the brothers Bullet and Vain Train. After thousands of years, they had discovered a planet rich in mineral resources and planned to return to GoBotron with news of their discovery. None too soon, in fact, for Decker Decker had become increasingly disenchanted with Hi-Way's high-minded and imperious form of leadership.

As they returned to GoBotron, however, the crew were attacked by a pair of Renegade Space Hawks. Apollo escaped to warn GoBotron, but Hi-Way and the rest of his crew were brought aboard Roguestar for Brainstorming. Cy-Kill also observed the interaction between Hi-Way and Decker Decker and spotted an opportunity for recruitment. Using his mental powers, Cy-Kill subtly enhanced Hi-Way's imperious behavior to further drive the wedge between him and Decker Decker. A similar tactic separated the train brothers, and Crasher was able to convince Decker Decker and Vain Train to join the Renegades. Apollo returned with Leader-1 and the Guardians for help, freeing Hi-Way and the remaining members of his crew from Roguestar. Hi-Way, Bullet, Apollo and Jack Attack joined the Guardians under Leader-1's command after that. Brother's Keeper

At the Cape Canaveral Space Center, Hi-Way and Turbo were guarding UNECOM's new quantum computer. Apollo arrived for an inspection tour, but Matt Hunter sussed out his true identity. The Guardians unveiled the Renegade spy, Jig Saw, using some rather painful puns to congratulate themselves for seeing through his disguise. In Zod We Trust

As Sideways and Gong played with mixing universal streams, the Decepticons staged an all-out assault on Guardian City on Earth. Street Heat and Hi-Way were escorted to oblivion by Soundwave and his Recordicons. Echoes and Fragments 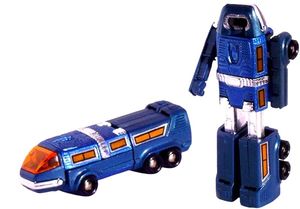 Highway Robo converts from robot into a futuristic bus. Produced by Bandai for the Machine Robo line, Highway Robo was one of several molds not imported to the West by Tonka for the GoBots toyline. He was retroactively added to GoBots continuity by Renegade Rhetoric, and given the GoBots name of "Hi-Way".