Jack Attack is a lost GoBot who returned to GoBotron to become a Guardian long after the Renegade conflict began. 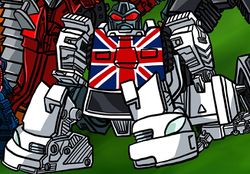 During the Diaspora, Jack Attack was dispatched to Level 29 along with an assortment of Guardians and Renegades. Cultural Appropriation

Thousands of years ago, Jack Attack had been part of a deep space exploration mission that left Gobotron shortly after the GoBot upgrade. They were returning to GoBotron after their long journey when Scorp and Crain Brain of the Renegades intercepted their ship in a pair of Space Hawks. After their capture, Cy-Kill was able to convince Decker Decker and Vain Train to leave their fellows and join the Renegades. When Apollo escaped and returned with Leader-1 and the Guardians, the Renegades were driven off. Jack Attack, Apollo, Bullet, and their captain, Hi-Way, became new members of the Guardians. Brother's Keeper

Jack Attack and Snoop were part of Doctor Braxis's personal guard after he found a way to install mind-control chips in most of the Guardians and Renegades. Once Braxis Twice Shy Part 2

As Sideways and Gong played with mixing universal streams, the Decepticons staged an all-out assault on Guardian City on Earth. Jack Attack piloted a Command Center from Moonbase One, bringing Leader-1 and an assortment of Guardian reinforcements to aid their comrades. Echoes and Fragments 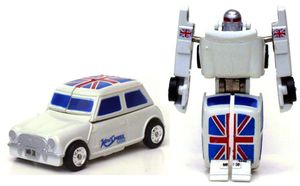 Mini Cooper Robo converts from robot into Mini Cooper 1300S, with stylish Union Jack markings (Hail Britannia!). Produced by Bandai for the Machine Robo line, Mini Cooper Robo was one of several molds not imported to the west by Tonka for the GoBots franchise. He was retroactively added to GoBots continuity by Renegade Rhetoric, and given the GoBots name of "Jack Attack".