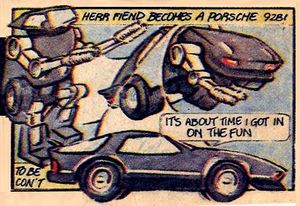 GoBots was a syndicated comic serial ran in Canadian newspapers, drawn by Niki Mueller. The strip primarily focused on the Super GoBot toys.

Thruster leaves GoBotron as part of Cy-Kill's plan to conquer Earth, ordering Herr Fiend to prepare the invasion. However, they are followed by the Guardians Leader-1 and Baron Von Joy. Leader-1 arrived on Earth only to immediately come under fire from Destroyer. He switched to robot mode to battle the Renegade, unaware Cy-Kill had sneaked up behind him, burying the Guardian under rocks. Thankfully Baron Von Joy detects Leader-1's distress call from the Command Centre. He uses his Porsche mode's magnet beam to pull his comrade to safety, though he cannot find a power pulse, and races back to the Command Centre to carry out repairs. Meanwhile Cy-Kill and Destroyer raid a military research base and steal a sorium crystal that will fuel their bid to take over the universe, while Baron Von Joy is able to get Leader-1 to the Command Center's repair bay, but struggles to revive his fellow Guardian.

Cy-Kill then calls Herr Fiend down to Earth, and they contact the giant Puzzler, tasking it with destroying Earth's cities. Leader-1 revives and the Command Center heads to the Arctic, where Cy-Kill is planning to unleash the power of the sorium crystal. Leader-1 confronts him but the Renegade throws the crystal inside the Command Center.

Will Leader-1 leave the Command Centre to be destroyed by sorium?

Will Leader-1 be able to stop Cy-Kill from carrying out his plans for world domination?