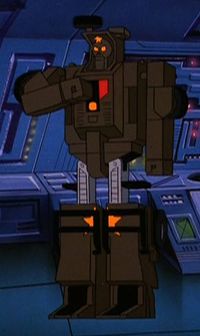 Where'd you get those peepers?

One of Cy-Kill's loyal henchmen, Geeper-Creeper is sneak and a bully who delights in causing as much pain as he can—even to his allies, if he can get a good laugh out of it. Renegades and Guardians alike avoid him, because they all agree: he gives them the creeps!

Battle for GoBotron Conquest of Earth Earthbound The Final Conflict 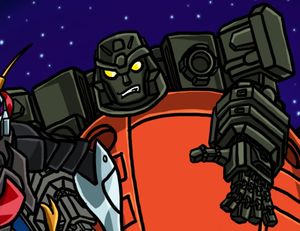 When Cy-Kill decided to campaign for President of the United States, the Renegades organized to "get out the vote". The methods they used may have seemed unorthodox, even criminal, but really the disaster at Fort Bragg was Geeper-Creeper's word against Twister's. Cy-Kill For President

Geeper-Creeper and the Renegades attacked UNECOM to secure a new element called Scootonium. Geeper recovered the element from the Command Center while a battle with the Guardians raged, and Cy-Kill ordered a retreat after he was successful. The Scootonium Scenario

When Cy-Kill detected a group of dimensionally-displaced Autobots fighting the Guardians, he dispatched Geeper-Creeper and a group of Renegades to help out the newcomers, assuming that the Autobots and their Guardian-fighting ways would them make ideal allies to the villainous cyborgs. The Renegades defeated the Guardians and escorted the Autobots back to the Rogue Star. When they realized that they'd been duped, the Autobots turned on the Renegades after discovering that their GoBot benefactors were evil. Brain Problem Situation

As Sideways and Gong played with mixing universal streams, the Renegades staged an all-out assault on Autobot City on Earth. Geeper-Creeper was one of the Renegades fighting to breach the Autobot defenses. Echoes and Fragments 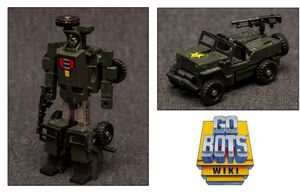 An import of the Machine Robo Jeep Robo toy, GoBots Geeper-Creeper transforms from a robot to a military support vehicle similar to a Jeep. Geeper-Creeper features die-cast metal parts. He also features a removable machine gun that can be wielded in robot mode—a rarity for small GoBots. The gun is often missing on loose samples. He is also susceptible to wear in several places, particularly his head and his hip joints. The former tends to slide down into the body easily. His plastic windscreen pieces are also often lost on loose specimens. Geeper-Creeper was released three times: initially in the first series of GoBots figures in 1983, then in the second series in 1984, packaged with a holographic sticker, and again in the third series in 1985, this time in a multi-pack with Crasher and Tank.

The sixth and final toy from the third wave of figures, Jeep Man was released by Bandai Australia in 1983. He remained identical to the original Jeep Robo toy, albeit packaged on a blue backing card.