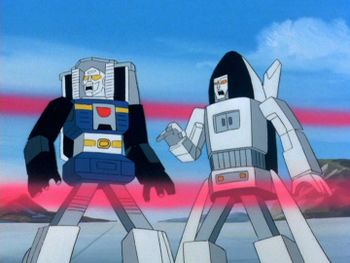 Hans-Cuff is a Guardian. He typically operates on GoBotron instead of Earth, focusing on police and security issues for the Guardians. 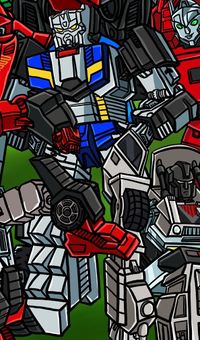 During the Diaspora, Hans-Cuff was dispatched to Level 59 along with an assortment of Guardians and evil Rock Lords. Cultural Appropriation

Hans-Cuff and his security officers Dozer and Scratch were patrolling the Guardian Council chambers when they responded to a blast. They found the Robo Rebel cadets standing over the prone form of Zeemon, recently blasted in the chest. The Rebels were arrested for further investigation. Rebels Without A Circuit

When the Rock Lords visited Gobotron, some suspicious sabotage drew condemnations from Turbo. When Leader-1 was injured in a blast, Turbo assumed command and had Hans-Cuff arrest Rock Roller on charges. On the Rocks

When the Autobot Spy Changers first arrived on Strata 22, Turbo mistakenly assumed they were Renegades. Hans-Cuff was one of the Guardians he assembled to attack and capture the Spy Changers. Brain Problem Situation

In an unstable hybrid universe that incorporated both GoBots and Transformers, Hans-Cuff was aboard a Guardian shuttle bound for Earth when Megatron attacked and hijacked the ship. The Decepticons executed him while seizing the ship.

(Hans-Cuff only suffered this fate retroactively due to the machinations of Sideways and Gong. When the events actually took place in this hybrid timeline, it was an Autobot crew who were attacked by Renegades.) Echoes and Fragments 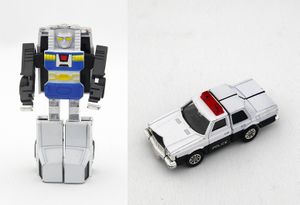 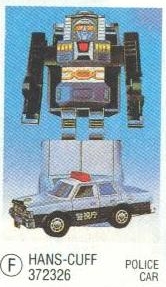 The fourth toy from the second wave of figures, Police Man was released by Bandai Australia in 1983. He remained identical to the original Police Robo toy, albeit packaged on a blue backing card.

Hans-Cuff was released as part of the Australian-exclusive Staks Transport Collector Pack in 1985, alongside repaints of Turbo, Rest-Q, and Buggy Man. While his robotic features remained unchanged, the figure's vehicle mode was painted silver with a black sunroof. Later shipments replaced the figure with an unchanged Fitor.

A carded repackage of Police Robo, the figure now known as Police Car was released by Bandai Europe at the end of of 1983.