Road Ranger is a tough but friendly Guardian soldier. He's not that truck guy. No, really. He's not.

Road Ranger was a Guardian security agent at a UNECOM facility in Utah. After Cy-Kill failed to get a brainwashed Scooter to destroy the base for him, Road Ranger and the Guardians confronted the Renegades directly. They were on the verge of victory over the Renegades when Professor Von Joy tried to help, and his malfunctioning invention created a distraction for the villains to escape. It's the Thought that Counts 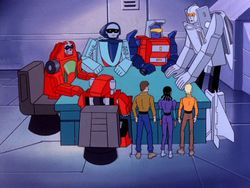 When the Renegades started anticipating Guardian missions with suspicious frequency, Leader-1 declared there must be a traitor in their midst. As the two unimportant Guardians on Earth at the time, Road Ranger and Heat Seeker seemed to be likely suspects. However, Turbo's brash actions drew suspicion on him, before Leader-1 supposedly was caught destroying the Astro Beam on the Command Center. In fact, "Heat Seeker" was really the Renegade Bad Boy in disguise, but the Guardians came up with a plan that made him reveal himself. Wolf in the Fold

Road Ranger was serving a stint on the Guardian Council when they were taken hostage by Leader-1 and several others, who had been brainwashed with Beta frequencies. Despite outnumbering Leader-1's brainwashed goons nearly two-to-one, the Council put up little fight when they were forced aboard a Command Center to Roguestar. Fortunately, Scooter and Nick were able to cancel out the beta frequencies, and the Guardians reverted to normal. Whiz Kid

Road Ranger was running security at a manufacturing plant on GoBotron when it was attacked by Zero, Crasher, and Cop-Tur. He activated the auto-gun defenses, which proved too much for the Renegades and forced them to retreat. The Third Column

A next generation Go-Bot, Road Ranger was built and brought online after the conquered Earth had been rebuilt into Gobotron. Said to be descended from kings, Road Ranger spent most of his days patrolling the highways of Gobotron, fighting off bandits and even Zod. His heroism reached the audio receptors of the Trade Federation who felt Road Ranger's heroism would net him command of the planet. Road Ranger's charisma caused many other next-gens to follow him as well as several of the oldest Go-Bots such as Bug Bite and Zeemon. Go-Bots #3 Go-Bots #5

After Leader-1 had ventured to Earth to find the Lazer Lance said to be capable of defeating Zod, Dr. Braxis's Vamp army attacked the surface of Gobotron only for Road Ranger to cleave the mad man in two, introducing himself and his entourage to Turbo, Crasher, and Scooter. After seeing him tame the Command Center, Turbo and Crasher agreed it best to let the next gens decide where society would go, riding with Road Ranger to Gobotropolis.

For his first act as the planet's ruler, Road Ranger decided to leave Earth and what little remained of humanity behind, declaring it time that the Go-Bots find their true place in the universe. As Gobotron, free from its tainted past, sailed through hyperspace, Bug Bite questioned him on their future plans. Road Ranger answered that they would begin producing not only new Go-Bots, but new Gobotrons, seeded throughout the cosmos. To emphasize this, Road Ranger directed his companion's attention to his latest project, an "optimized" heir that he was building, and encouraged his friend to do the same. As the Volkswagen considered it, he asked what was to be done with Leader-1 and Cy-Kill's remains. After mulling it over, Road Ranger decided that both demagogues were more trouble than they were work and instead opted to salvage their remains and use them to build a new Go-Bot, one that would, hopefully, embody the best traits of both leaders. Go-Bots #5 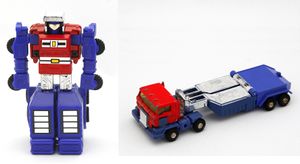 Road Ranger transforms from robot to articulated transport truck, featuring die-cast metal and chrome parts. He was released in the first series of GoBots figures in 1983.

Road Ranger is a straight import of the Machine Robo Truck Robo toy.

The second toy from the third wave of figures, Semi-Trailer Man was released by Bandai Australia in 1983. He remained identical to the original Truck Robo toy, albeit packaged on a blue backing card.

A carded repackage of Truck Robo, the figure now articulately known as Articulated Lorry was released by Bandai Europe in 1984. While he was never reissued, catalogs and packaging from 1985 onward listed the toy under his GoBots name.

Road Ranger is a redeco of the Transformers Mini Vehicle Huffer, transforming into a cabover-syle semi truck of indeterminate model. He was only available in an e-HOBBY-exclusive Collector's Edition six-pack with Bad Boy, Bug Bite, Path Finder, Small Foot, and Treds.