The Fall of GoBotron Flight to Earth Return to GoBotron 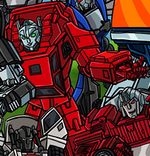 During the Diaspora, Sparky was dispatched to Level 51 along with an assortment of Guardians and Renegades. Cultural Appropriation

Cy-Kill released mutated fast-growing plants over the Earth, called Go-Vines. Sparky and Small Foot snuck aboard Thruster and confiscated some Go-Vine seeds, which Professor Von Joy used to create a defoliant and eliminate those wacky weeds. The GoVine Incident

On the planet Amazonia IV, female Guardians and Renegades competed in the Three Trials of Boudica for an object of great power. In the Test of Courage, Sparky and Vamp played chicken against a giant rolling boulder. Vamp finally leapt out of the way at the last moment, but Sparky stood her ground and won, learning the boulder was in fact deceptively light. Ladies Night

As Sideways and Gong played with mixing universal streams, the Decepticons staged an all-out assault on Guardian City on Earth. Sparky was one of the victims who fell in battle along with Professor Von Joy. Echoes and Fragments

Produced by Bandai for Tonka exclusively after Machine Robo declined in the East, GoBots Sparky converts from robot to Pontiac Fiero. Later shipments of the figure included a free hologram sticker.

Part of the ninth wave of figures, Sparky was released by Bandai Australia in 1985. She remained identical to her GoBots counterpart, albeit repackaged on a new black backing card depicting a yellow-tinted alien landscape.

Sparky was released in France by Bandai in 1986. The figure itself is unchanged, plus shares the same product artwork and packaging bubble as her Australian release. However, the backing card was changed to solid blue with a horizontal red line running across the bottom. The card also featured bilingual text, and manages to include the American, French, and British names for the line in the title.