The Command Centers are multi-use vehicles and the backbone of the Guardian fleet. Each is capable of faster-than-light travel and can hold a large number of GoBot soldiers, allowing them to be used both as transportation and mobile headquarters. 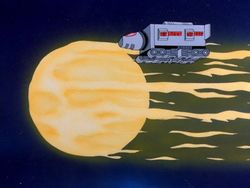 When Gong met Sideways, the two debated between the Transformers and the GoBots, with Gong blending realities together to create a war between the Autobots and the Renegades. As a consequence of this merger, the Autobots utilized Commander Centers as their ships, Cy-Kill attacking and boarding one bound for Autobot City. The hull breach however managed to alert the city's guards, allowing them to mount a defence.

Sideways fired back by tampering with universes so that now, Guardians fought Decepticons before all four factions co-existed with Autobots and Guardians pitted against Decepticons and Renegades. After Unicron had devoured Cybertron's moons, the Autobots and Guardians raced to Command Centers 09 and 33. While Galvatron managed to destroy Command Center 33, Command Center 09 was able to feign destruction and made a fiery crash landing on Quartex for repairs. Within a month, it might have been space worthy but it didn't really matter when Galvatron found them and blew up the ship. Echoes and Fragments

"Command Centers" were naturally occurring animals on Gobotron, one of which Leader-1 domesticated, turning the beast into his mobile seat of power. When Zod was sighted, the Command Center raced to the scene only for Zod to escape once again. The Go-Bots found the returned Spay-C who was taken prisoner, and chose to comment on the rather sinister sounding names of the many rooms, releasing his human astronauts to find answers. That night, as Leader-1 contemplated atop the Command Center, he was visited by Eno who led him on a chase across the planet, passing by a herd of Command Centers.

As Leader-1 battled Zod, Cy-Kill stole the Command Center, using its tractor beam to abduct Scooter before flying off back to Gobotron. Go-Bots #4 Spay-C managed to shuttle Turbo aboard who hacked his way through every Renegade, even hurling Loco into the "Disintegration Chamber", before he found the Enemy Re-programming Center and the record that showed he was responsible for Scooter's damaged state of mind. Emboldened more than ever to destroy Go-Bot society, Turbo confronted and killed Cy-Kill, seizing command of the Renegades and the Command Centre. Alongside the Thruster, the Command Center picked up strangling passengers before returning home. 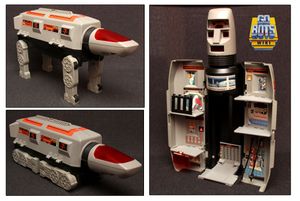 One of several toy concepts designed by Tonka exclusively for the GoBots toyline, the Command Center serves as a vehicle, playset, and carrying case for Guardian figures and is one of the largest toys in the entire line. In vehicle mode, the Command Center rolls freely on eight plastic wheels. Flipping out the four legs transforms it to "mobile land-walker" mode. Four "stations" on the exterior of these modes are labeled with numbers (0, 1, 5, and 7) but do not interact with figures in any meaningful way. Standing it on end and opening the top panels results in "fortress" mode, which features several elements common to 1980s playsets. An elevator in the central column (labeled "Vertical Transport Module, or "V.T.M") can move GoBot figures between the fortress' seven rooms. These rooms have very little sculpted detail, with most of their personality coming from paper labels. The rooms include a "Trauma Center" (guarded by a clear plastic "enemy detector"); "Interrogation Center" (featuring a wanted poster showing Cy-Kill, Fitor, Loco, and Cop-Tur); "Gobot Dematerializer" (showing a red version of Tank being disintegrated); "Alien Detention Center"; a fuel station (with two rubber fuel hoses); a cafeteria (complete with a menu featuring "blast off burgers," "gasberry pie," and flavored antifreeze); and an "enemy reprogramming center" showing, bizarrely, Scooter hooked up to some machines. Finally, the Command Center's cockpit can swivel around to reveal a (goofy) robot face. If a nine-volt battery is connected to the inside of the canopy, a button above the robot's nose activates flashing lights and sound effects. Finally, under the robot head is a secret chamber labeled "strategic command." The Command Center was released in the second series of Gobots figures in 1984.