Spoiler is a Renegade known for his boundless enthusiasm. Cy-Kill often partners him with Slicks for a fast and furious double team. 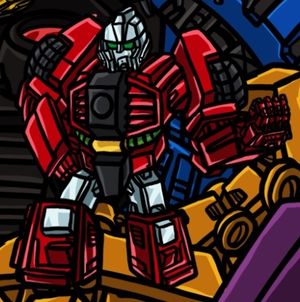 During the Diaspora, Spoiler was dispatched to Level 44 along with a few of his fellow Renegades and the RoGuns. Cultural Appropriation

Spoiler and Bug Bite were appointed saboteurs by Cy-Kill to prevent the Guardians and Rock Lords from establishing a firm alliance. They orchestrated a series of "accidents" and explosions that pointed towards Rock Roller, a Lord unfamiliar to the Guardians. Unfortunately for the Renegades, their ruse was ultimately uncovered. On the Rocks

When a raid on a Guardian communications hub went bad, Cy-Kill was particularly harsh to his troops. So, when the Master Renegade appeared offering Power Suit upgrades to the Renegades if only they made him leader, Spoiler, Fly Trap, Loco, and Screw Head eagerly turned on Cy-Kill. Spoiler's reverse-engineered P3 suit gave him blinding speed. Eager to test their might, the Power Suited soldiers and the Master Renegade launched a direct assault on the Gobotron Fortress. When the time came to form a dark copy to battle Courageous directly, however, the "united" Renegades couldn't agree on who should control the combiner. The hobbled "Grungy" was easily beaten apart by Courageous, and the Renegades meekly limped back to Cy-Kill, begging for his good graces. Spoiler secured Cy-Kill's mercy by providing a scan of the Master Renegade's ship, giving the Renegades the chance to recreate their own Power Warrior. Coup de Grunge

As Sideways and Gong played with mixing universal streams, the Renegades staged an all-out assault on Autobot City on Earth. Spoiler was one of the Renegades fighting to breach the Autobot defenses. Echoes and Fragments 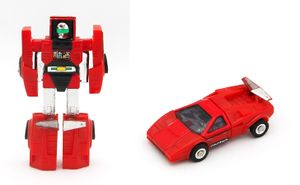