With a name like Psycho, one figures he had to join the Renegades.

Target Earth The Fall of GoBotron 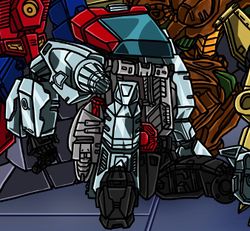 During the Diaspora, Psycho was dispatched to Level 11 along with an assortment of Guardians and Renegades. Cultural Appropriation

According to Cy-Kill, Psycho is incredibly fast as a GoBeing Psychoroid car, although his technical skills tend to get him assigned to duties other than field work. Renegade Rhetoric 2016/10/15

When the Renegades put on a performance of "The Pirates of Penzance" to get a mystical gemstone from a wealthy theatre fan, Psycho did remarkably well in the role of Ruth once Crasher passed it up. The Show Must Go On

Psycho and Blades attempted to thwart the alliance of Zero and the Master Renegade, but the Guardians intervened at a confrontation in a UNECOM warehouse. The Renegades were forced to flee without disposing of the traitors. Trash and Treachery

Psycho was one of the Renegades who attacked UNECOM in order to steal a supply of the new element, Scootonium. The Scootonium Scenario

For their own amusement, Sideways and Gong played with reality so that elements of a Gargent stream blended in and out of a Primax stream. After reality shifted, the Renegades assaulted a Command Center on its way to Autobot City on Earth. When the crew was disabled Slicks, Cop-Tur, Crasher, and Psycho assumed the controls. Echoes and Fragments 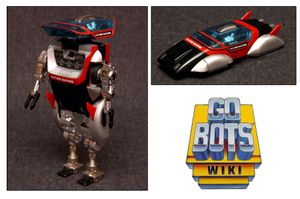 An import of the Machine Robo Psychoroid toy from the Scale Robo subline, GoBots Psycho transforms from robot to futuristic space-car. Psycho features die-cast metal parts and rubber tires. Like most of the figures derived from Bandai's Scale Robo line, Psycho's "head" is formed from the central portion of his vehicle mode. Unlike most of the other Scale Robo figures, Psycho's alternate mode is of fanciful origins, being based on the "Psychoroid" vehicle from the 1980s anime series Space Cobra. Tiny figurines of Cobra and his partner, Lady Armaroid, are actually visible inside Psycho's cockpit. Loose samples of Psycho often have damage to the chrome and red trim around the cockpit, and the two red fins on the rear part of the car are quite fragile. Psycho was released in the first series of Super GoBots figures in 1983.