Water Walk is a Renegade. 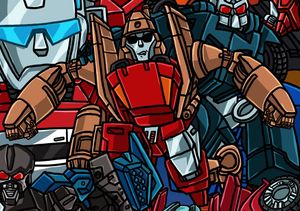 During the Diaspora, Water Walk was dispatched to Level 63 along with an assortment of Guardians and Renegades. Cultural Appropriation

Water Walk was one of the Renegades in Cy-Kill's entourage when he entered the U.S. Presidential race in order to secretly install the other candidates with Indoctrination Chips. Unfortunately, their ploy was uncovered and the Renegades were driven off. Cy-Kill For President

Using a supercharged Astro-Beam, the Renegades stole away the Communication Moon of Gobotron, leaving Cy-Kill and his handpicked squad free to pilfer its secrets for 48 hours. Unfortunately, they didn't realize Leader-1 had also been pulled away by the Astro-Beam, and was secretly working against them inside the moon. Water Walk was one of the first Renegades eliminated by Leader-1 as he McClane'ed his way around and towards Cy-Kill. The Stolen Moon

Water Walk brought Cy-Kill a communications report when the Renegades tapped into transmissions between Scooter and Nuggit on Quartex. This report clued Cy-Kill in to the existence of the Fossil Lord and his people's combiner form, Fossilsaurus. Fossil Fallout

Water Walk was one of the Renegades Cy-Kill brought to Mount Hotaka to learn ninjitsu from the Ashi Dojo. He proved highly effective for a time, but when Leader-1 learned ninjitsu as well, the Renegades were outmatched again. A mishap with the positronic jammer also wiped all the ninja knowledge from the GoBots' minds by the end of the conflict. Cy-Kill's Ninjas

As Sideways and Gong played with mixing universal streams, the Renegades staged an all-out assault on Autobot City on Earth. Water Walk was one of the Renegades fighting to breach the Autobot defenses. Springer took a shot at him during the invasion, but missed. Echoes and Fragments 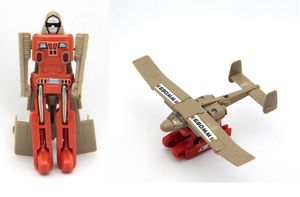 The first toy from the fourth wave of figures, Cessna Man was released by Bandai Australia in 1984. He remained identical to the original Cessna Robo toy's white and dark blue variant, and was packaged on a blue backing card.

Later in 1984, the figure was re-released with his GoBots name and faction on a new black backing card depicting a blue-tinted alien landscape.