The Renegades engage in piracy on the high seas. 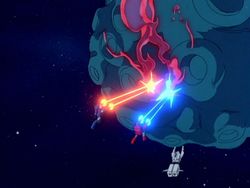 When UNECOM detects a huge meteor shower heading into Earth's atmosphere, toward Micronesia, the Guardians are called into action to save the day. With Flip Top on their side, Leader-1's team takes out as many of the space rocks as they can, but all have to combine their firepower to deflect the largest and most dangerous of the meteors. A few rocks get by while they are occupied with this task, landing in the ocean off the coast of Maru Maru Island, where their splashdown is observed by native brothers Woki and Katu. What the pair have no way of knowing, unfortunately, is that hiding among the meteors is the new Renegade fortress known as the Starfish! Having snuck by UNECOM defenses under cover of the meteors, Cy-Kill installs his new base on the seabed, surrounding it with a forcefield and concealing it with a stealth device, and sends out Water Walk to spy the cargo ships the villains' plan to pillage. 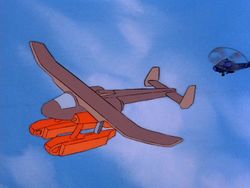 The Renegades' first target is a freight full of titanium, which is caught in a vortex generated by the Starfish, trapped in a bubble, and sucked down to the seafloor. Before it goes under, the ship gets off a distress call to UNECOM, but by the time the Guardians arrive on the scene, it has vanished beneath the waves. Out on the ocean doing some fishing, Woki and Katu watch the boat go down and are able to tell the Guardians what they have seen, leading Leader-1 to suspect the Renegades' involvement. The Guardians Astro-Beam underwater expert Dive-Dive in from GoBotron to help the monitor shipping lanes for signs of Renegade activity, but it is Flip Top who runs into Renegade trouble when his assigned ship, the SS Vega, is targeted by Water Walk for its vanadium cargo. So the capture of the vessel can be carried out covertly, Water Walk lures Flip Top into chasing him, leaving the Vega unattended long enough for the Starfish to captured it too. Unfortunately, Woki and Katu's boat is caught in the vortex, and while Katu is able to swim to safety, Woki is trapped in the bubble and dragged underwater with the Vega. The other Guardians arrive on the scene moments later, and Dive-Dive tries to follow the Vega, only for it disappear off his scanners when it is enveloped by the Starfish's stealth device. 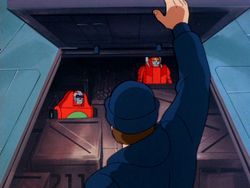 Calculating that the next thing the Renegades will require is chromium, the Guardians load a boat up with the metal to serve as bait in a trap. Turbo and Scooter hide in the ship's hold, while Matt, Nick, and A.J. disguise themselves as crewmen. Eager to help rescue his brother, Katu dons a disguise of his own and sneaks aboard, but is quickly found by the others. Water Walk soon appears to target the ship; Flip Top makes a show of fighting back so the Renegades don't suspect anything is amiss, and plays possum when hit. The ship is summarily captured with Turbo, Scooter, and the humans aboard and taken to the Starfish, where the crews of the other vessels have been put to work using the materials to expand the base in size. Matt conspires with a crane operator to "accidentally" dump a load of metal bars on Crasher, causing enough of a distraction for he, Nick, A.J., and Katu to get inside the Starfish itself. 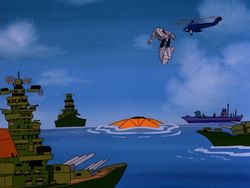 Once inside, Matt shuts down the stealth device, enabling Dive-Dive to spot the base, which serves as Scooter and Turbo's cue to emerge from hiding. Crasher and Cop-Tur pursue the two Guardians into the newly-built outer ring of the Starfish, but Turbo outmaneuvers both of them, keeping them busy while Scooter meets up with the humans in the control room. Matt and the kids are sent to get all the humans onto their ship, while Scooter reprograms the starfish to surround the ship with a bubble that returns it to the surface. Turbo then arrives to blast the machine, deactivating the forcefield. The Guardians make a run for it, pursued by a furious Cy-Kill, but Dive-Dive comes to their rescue, blasting his way into the now-defenseless Starfish, flooding it, and carrying Scooter and Turbo to safety in his submarine mode. The Renegades disconnect the original Starfish from the larger structure that has been built from the stolen materials and try to make a getaway, but once the base surfaces, they find themselves surrounded by Leader-1 and multiple UNECOM warships. Left with no choice, the villains abandon the Starfish and flee in Thruster, and the Guardians are left to celebrate their victory, with the reunited Woki and Katu enjoying the chance to sail on so big a ship. 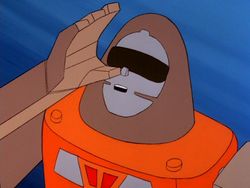 "Come and get me now, you little whirly-nerd!"

—General Newcastle sets Leader-1 up for a cool line 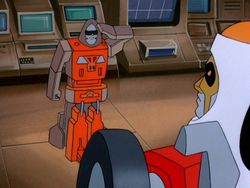 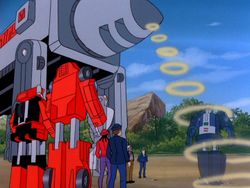 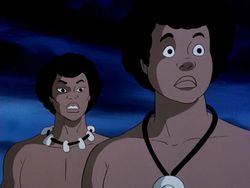 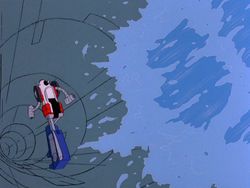