Guide Star is a Guardian computer specialist. Despite attending and completing Guardian Academy, Guide Star is a pacifist who wishes to avoid violence if at all possible. He prefers to serve the cause by the side of Zeemon, attending to administrative concerns rather than engaging Renegades directly. 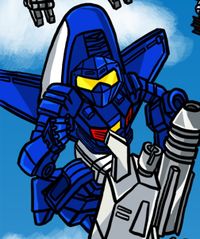 During the Diaspora, Guide Star was dispatched to Level 63 along with an assortment of Guardians and Renegades. Cultural Appropriation

In an alternate reality where Luther Unum never became Leader-1 and Renegades ruled Earth and Gobotron, Guide Star was a slave of the Renegades. When a group of human and Guardian rebels stowed away on a Thruster between worlds, however, Guide Star spotted them and distracted Slicks to prevent them from being discovered. He informed the rebels of the new prisoner Luther Unum the Renegades were so cautious of guarding. Renegade Victory Part 1

In the traditional reality, Guide Star and his friends Sky Fly and Beamer were recent graduates of the Guardian Academy. He and Path Finder were guarding a UNECOM facility on Mercury when the Renegades attacked in force. They were nearly overrun, but Doctor Braxis arrived and demonstrated his new Destabilizer Cannons on the Renegades, driving them off. Once Braxis Twice Shy Part 1

When Cy-Kill went missing during the Scootonium incident, Sky Fly, Beamer, and Guide Star participated in a massive Guardian attack on Rogue Star just as Cy-Kill returned from his other-dimensional exile. The newly-recruited Renegades Pow Wow, Breez, and Odd Ball attacked Guide Star and his friends as they arrived. Opportunity Knocks Part 2

During the Battle of Guardian City, Guide Star and his fellow Academy cadets were gunned down by Megatron. Echoes and Fragments

Guide Star converts from robot to space shuttle. He was released exclusively through Wendy's Restaurant as a pack-in toy for the Kid's Meals.