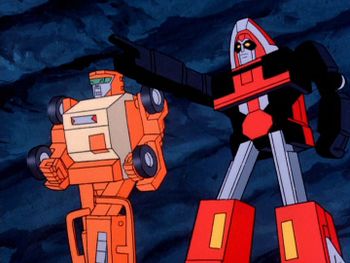 The one on the left.

Spoons is a Renegade. 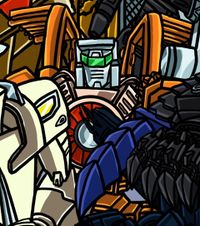 From Axiom Nexus, Cy-Kill bragged about the variety of GoBotic alternate modes, compared to those normally seen, and repeated, among Cybertronians. Spoons and his forklift mode were among his examples. Renegade Rhetoric 2015/10/14

When Cy-Kill ran for President of the United States, Spoons and Block Head "got out the vote" for the working class neighborhoods in Pittsburgh. Cy-Kill For President

The Renegades stole an experimental variation of the Astro-Beam from UNECOM called the Duplicator Beam. Instead of causing matter to change quantum superpositions, it allowed matter to exist simultaneously in two quantum superpositions at once for 48 hours, effectively creating temporary duplicates. Cy-Kill created duplicates of Spoons and his command team aboard Thruster, but neglected to realize the duplicate Cy-Kill would want to survive past his time limit. "Cy-Kill Prime" and the other duplicates turned on Cy-Kill and tried to force Professor Von Joy to redirect the quantum effect to the other group of Renegades. Spoons and the others were freed by the Guardians, and the duplicates were defeated and dematerialized. Mirror Menace

Seeking a combiner of his own to counter Courageous, Cy-Kill brought Spoons and the Renegades to Quartex. He approached Jaw Bone, the Fossil Lord, to form an alliance and gain the power of the united Fossilsaurus. When persuasion didn't work, he had Spoons grab the Fossil Lord's daughter Ulna as a hostage. The Renegades brought Fossilsaurs to Earth to attack UNECOM and battle Courageous, but the Guardians snuck aboard Thruster and bested Spoons, freeing Ulna and turning the Fossil Lords against Cy-Kill. Fossil Fallout

Spoons was one of the Renegades Cy-Kill brought to Mount Hotaka to learn ninjitsu from the Ashi Dojo. He proved highly effective for a time, but when Leader-1 learned ninjitsu as well, the Renegades were outmatched again. A mishap with the positronic jammer also wiped all the ninja knowledge from the GoBots' minds by the end of the conflict. Cy-Kill's Ninjas

During Cy-Kill's extended absence from Level 1, the Guardians launched an all-out assault on Roguestar. Spoons and Stretch were pinned down by enemy fire when Cy-Kill triumphantly returned with a new combiner and new troops to augment his forces. Clutch and Warpath got the veteran Renegades out of harm's way as the tide turned. Opportunity Knocks Part 2 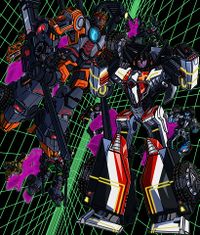 In a hybrid universe where the Transformers and GoBots coexisted, Crain Brain, Screw Head and Spoons used their vehicle modes to breach the walls of Autobot City, singing as they went. Kup and Hot Rod used the Renegades as impromptu ramps to launch themselves into the closing city. Hot Rod skipped over Spoons and knocked Crain Brain off the bridge before Kup came barreling through, crushing Spoons's head and tossing Screw Head aside as well.

On the way back to Cybertron, Zero pushed Megatron and several other dying combatants out of Astrotrain. They found Unicron, and after Megatron bargained for his life he and his troops became new servants of Unicron. Spoons was reborn as Deadlift, the tracker, while Screw Head and Crain Brain became his huntsmen, Sweeps. Echoes and Fragments

A cantankerous worker at the Tonka Building, Spoons, along with his technician, remained in the building when the Go-Bot revolution began. When A.J. Foster, Matt Hunter, Scooter, and Turbo arrived, thinking the issue to be a G-chip malfunction, the technician informed the quartet that what they were witnessing was simple evolution before Spoons drove him away. Go-Bots #2