Clutch is a new Renegade. 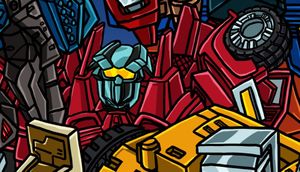 During the Diaspora, Clutch was dispatched to Level 72 along with an assortment of Guardians and Renegades. Cultural Appropriation

Clutch was a Decepticon hailing from an unknown universal stream when Cy-Kill found him in Axiom Nexus. He was recruited into the Renegade cause by Cy-Kill during his time in the offworlder sector, and helped Cy-Kill recruit new Renegades and acquire useful technology. Clutch was responsible for planning the raid on Shockwave's laboratory in Axiom Nexus. Renegade Rhetoric 2015/10/15

Although useful to his ad hoc command team, Cy-Kill found Clutch a bit obsessive, a trait which could be troublesome in certain circumstances. He considered teaming Clutch with BuggyMan once they returned to Gobotron. Renegade Rhetoric 2015/10/16

After the successful raid of Shockwave's lab, the Axiom Nexus Renegades were found by the Offworlder Zone Security Administration. At Cy-Kill's command, Clutch gathered their "liberated" materials together just before Gong transported them to Cy-Kill's home universal stream. Renegade Rhetoric 2015/10/21 As they arrived on Level 1 in the midst of a Guardian/Renegade struggle, Clutch and Warpath helped rescue Spoons and Stretch from their Guardian attackers. Opportunity Knocks Part 2

Later, Clutch and Heart Attack visited Gobotron to retrieve the deconstructed remains of Cy-Kill's first combiner, Puzzler. Using notes Clutch retrieved from Shockwave, Cy-Kill intended to revive the entity as a new form of machine life thanks to sparks acquired on Axiom Nexus. Six Heads are Better than One

Cy-Kill would later remark upon how well Clutch and Warpath were fitting in with the Renegades. One Born Every Minute

When asked about the origin universes of Clutch and Warpath according to the TransTech universal stream system, Vector Prime declined to answer. Ask Vector Prime 2015/11/07

Clutch existed in a tangled universal stream where Sideways and Gong were deliberately blending elements of the GoBots and the Transformers. Warpath and Clutch were present when Galvatron destroyed Zero, and nervously accepted him as the new ruler of the Renegades and Decepticons. Echoes and Fragments 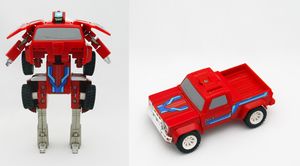 GoBots Clutch converts from robot to Chevrolet C/K pickup truck. As part of the final round of Super GoBots, Clutch was designed by Bandai specifically for the Western markets, as Machine Robo was losing support in Japan.