Rock Lords rolled into the stores in 1986, a spinoff of the GoBots toyline, featuring figures that converted into powerful living rocks. Released by Tonka in the U.S. and Bandai in Europe, the toys were a mixture of plastic and die-cast, and came with weapons that had the ability to be easily lost. Some were transparent jewels, some combined, and some could be used to throw at your siblings.

The toys were released concurrently by Bandai in Japan in the Machine Robo: Revenge of Cronos and Machine Robo: Battle Hackers lines from 1986-1987. 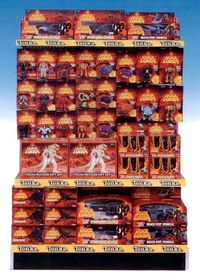 You will never own this

The first two waves of Rock Lords are what most people think of when they hear the phrase “Powerful Living Rocks”. Straightforward, no-nonsense action figures that turned into rocks, the first two series were a tour-de-force of plastic rock action. All your favourite characters such as Boulder, Magmar and Granite are there! Marbles is also there.

There were six figures on each side, with two chromed figures (Nuggit and Slimestone) designed to look pretty but slowly flake to pieces as you played with them.

The third series of Rock Lords was made up of just two figures, Saberstone and Spearhead, and incredibly hard to find. Saberstone is a rare example of a female character, even rarer in that she looks like a horrible monster with whips for hands rather than a traditional pretty girl. She has a gimmick where her spring-loaded head pops up at the touch of a button. Spearhead has a gimmick where he’s impossible to find in good condition.

The Rockasaurs were slightly larger figures that turned into terrifying dinosaurs. Terra-Roc became a big pterodactyl, and Spike Stone was nothing like a Triceratops, despite what the packaging might claim.

The three Jewel Lords are significantly harder to find than the other original Rock Lords, both due to their scarcity and also their desirability to collectors. They are a combination of die-cast and transparent plastic and look spectacular.

The leader of the Jewel Lords, Solitaire, is another example of an 80s female character (though this toy is a much more stereotypically ‘feminine’ design) and was featured heavily in the movie.

The first wave of Shock Rocks were slightly larger figures and featured complex gimmicks. Rock Shot held a ball that he could throw, Stone Hook had a hook on a string that could be retracted with the press of a button, and Rock Roller had a flywheel on his underside that allowed him to roll quite effectively across the floor and smash things down.

The second wave of Shock Rocks were far less adventurous than the first but make up for it by being stupefying hard to find. Each figure resembled a sphere which flipped open at the press of a button to reveal a head and two stubby little arms.

The four figures don’t have individual rock modes (though that didn’t stop Tonka from planning to sell them individually in the US) but combined into the fearsome Fossilsaurus!

Two exciting vehicles were available, the Stone Wing and Rock Pot. The Stone Wing transformed from a car into a (presumably not very aerodynamic) stone jet. It featured a reasonably powerful spring-loaded battering ram. The Rock Pot resembled a mobile conveyer belt, and had a treadmill section which Narlies could be clipped onto. If this does not sound exciting then you are dead inside.

The Narlies seemed to come from a completely different toyline, and yet were front-and-centre to Rock Lords media from the very beginning.

A Narlie is a little plastic beast with fur on its back. When it is rolled along, the head and tail wiggle and it makes a ‘groink’ noise thanks to the plastic gears inside. Calling it an animal noise is pretty generous, but it was a big selling point on the packaging! The first series of Narlies are relatively easy to find and some featured in the movie.

The second series were released in much smaller quantities and are next to impossible to get hold of. Whilst they are all unique molds, they pretty much look identical unless you stare closely.

Snarlie-Narlie was the king of the Narlies, a gigantic motorised Narlie that resembled a bull and was released only in the US. He too is absurdly hard to find 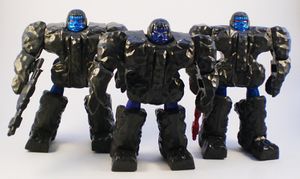 All the Granites! Euro (left), Japan (centre), US (right)

Rock Lords were released by Tonka in the US on cards, and by Bandai in Europe in boxes (except the Narlies, which were carded in both locales). Most of the series 1 and 2 Rock Lords have different color weapons, and extremely minor variations in plastic colours and paint shades, which the true heroic Rock Lord collector will want to own!

As part of the Machine Robo: Revenge of Cronos line, all of series 1 and 2, the Jewel Lords, Rockasaurs, and Stone Wing vehicle were released. Most of these came in new and exciting colour variations that will nowadays cost you the price of a kidney to get hold of. The Fossil Lords were released as part of the follow-up Battle Hackers line despite also appearing in Revenge of Cronos.

Some of the Japanese figures were released in the UK as grey imports.