Ok, for those who are interested in getting the Rock Lords stuff up, let's be coordinated. I'm happy to start work on template pages, so we don't need to keep fiddling with stuff.

I'm happy for anything on my blog www.rocklords.co.uk to be used, especially the pictures, as long as there's a link back and credit where done so. I've also got more pics of variants etc on my harddrive waiting to be edited. Blueshift2k5 (talk) 22:03, 10 January 2017 (UTC)

"It lasted for five issues before being cancelled, and subscribers received the Official Statue of Liberty Magazine in its place." That's not what I received. My subscription was transferred to some computer magazine.--Khajidha (talk) 19:09, 12 January 2017 (UTC) 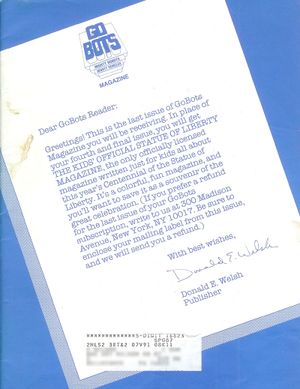 Maybe it depended on when you subscribed? I only remember getting 1 or 2 issues of the GoBots magazine before the subscription changed over. --Khajidha (talk) 13:06, 1 March 2017 (UTC)