Tork is one of the Secret Riders.

The Renegades Tork and Blades used the Astro Beam to join Cy-Kill on Earth. He needed reinforcements to help him claim the power of the alien known as Alaric. Despite their firepower, however, Tork and Blades were virtually useless in the fight that followed. The Gift

Later, Tork was a cadet in the Guardian Academy, training with the Blue Team that included Tri-Trak and Twister. Unfortunately, the Red Team of Re-Volt and his crew constantly outperformed the Blue Team in training exercises, and the impetuous Tri-Trak's behavior wasn't helping Tork's unit. When graduation day came, Tri-Trak was the only cadet not to make the grade, and so Tork and the others proceeded to the final Modification ceremony without him. Tri-Trak discovered the Red Team were actually Renegades who sabotaged him, and he arrived to stop their plot to kidnap Zeemon. Tork, Tri-Trak, and Twister worked together and prevented Re-Volt's Dread Launchers from escaping with their hostage. Afterwards, the Blue Team all received final Modification, and adopted the unit codename, the "Secret Riders". Guardian Academy

Tork was working with Van Guard and Turbo on the construction of GoBotron when the Rock Lords first entered their airspace. GoBots: Battle of the Rock Lords 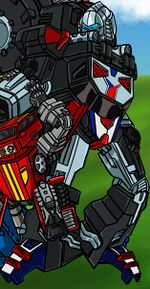 On Axiom Nexus, Cy-Kill recalled the Secret Riders' victory over the Dread Launchers at their graduation. He remembered the Guardian members Tri-Trak, Tork, and Twister, but couldn't recall the fourth member of the Secret Riders. Staks? Throttle? Renegade Rhetoric, 2015/10/17

Tork and the Secret Riders once joined forces with the RoGuns to attack Renegade base on Mars. The RoGuns of Mars

The Secret Riders were pursuing Cy-Kill when an accident caused Leader-1 to lose his memory. When the Guardian leader saw the three Secret Riders ready to capture Cy-Kill and Crasher, he stepped in to instinctively protect the outnumbered Renegades. A quick-thinking Cy-Kill twisted Leader-1 against the Secret Riders entirely, and Tri-Trak was forced to order a retreat lest they harm Leader-1. The Arithmetic of Memory

Tork and the Secret Riders fought the Renegades Fangs, Crossword, and Decker Decker near a human prison until Crossword threw Twister through the side of the facility. This freed the villain Trident and led to the formation of the Guardian Smashers. The Guardian Smashers

A rivalry began to develop between the Secret Riders and the up-and-coming Robo Rebels. Twister and Tork grumbled about the Rebels getting choice assignments, but Tri-Trak tried to remain level-headed and argued that all assignments were important. Unfortunately, the Riders were unable to stop the Renegades from stealing the Macrocosmic Continuum Distorter from the Scientific Moon of GoBotron and, to make matters worse, their call for aid brought none other than the Robo Rebels. Tempers flared between the two groups when the Rebels teased the Riders about their failure. Twister challenged Bent Wing to a race to track down the Renegades, and Tri-Trak was forced to go along to keep an eye on his peers.

The two pursuing Command Centers were led into a trap by their Thruster targets, surrounded by nine Thrusters that disabled the ships and brought them aboard Roguestar. Despite their capture, the Secret Riders and Robo Rebels continued to squabble until Tri-Trak channeled Leader-1 and gave a speech about tolerance, or teamwork, or something. The united Guardians split into two mixed teams to disable the Distorter and repair one of the Command Centers using parts from both. They were successful and escaped Roguestar having learned a valuable lesson. Riders and Rebels

Tork and the Secret Riders were present on Quartex when Boulder, the Guardians, and UNECOM began the tri-planet alliance in opposition to the evils of the universe. Unfortunately, Cy-Kill was also in attendance, and his three combiners Puzzler, Monsterous, and the new Nemesis secured his victory over the forces of good. Combiner Wars Part 1 Still, Matt Hunter managed to rally the Guardians and Rock Lords to press on against Cy-Kill. They used Cy-Kill's own arrogance to turn his allies against him, and the battle began anew. Tri-Trak and the Secret Riders were among the Guardian forces who helped vanquish Cy-Kill and Magmar, seemingly forever. Combiner Wars Part 2

As Sideways and Gong played with mixing universal streams, the Decepticons staged an all-out assault on Guardian City on Earth. Tork and the Secret Riders manned the parapets to fend off their attackers. When Leader-1 fought Megatron to a standstill, Tork and Tri-Trak arrived to help their leader take Megatron into custody. Unfortunately, when Tri-Trak saw Megatron reach for a weapon, he impulsively fired off his hand-blasters, and Megatron deflected the shots into Leader-1. With one more round of fire, both leaders fell to the ground.

After the battle was over, the Secret Riders and Robo Rebels attended the bedside of Leader-1 as their commander passed away from his injuries. Tri-Trak blamed himself and stormed out of the recovery room. Tork went to follow, but Throttle cautioned him to leave their friend alone to deal with his grief privately. Echoes and Fragments 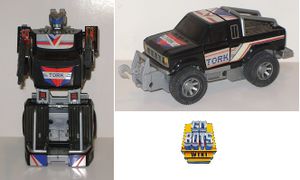 A redeco of a toy from Bandai's Zenmai Kahen Winch Robo line, Tork transforms from robot to black Ford Ranger. Tork has a working winch, and a pull-back-and-go motor that works in both modes.