Scooter and Nick face prehistoric perils when they are stranded on a primitive alien planet. 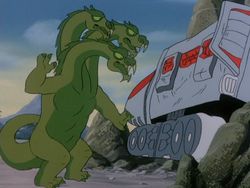 Investigating the Omega Prima system for a new Renegade base, Scooter and Nick get more than they bargained for when they discover the villains building a huge new spaceship-fortress. The pair are caught snapping pictures of the base and come under fire from Thruster, which cripples their Command Center and forces them to make a controlled crash-landing on a nearby planet with a similar atmosphere to Earth. Before going down, they are able to alert UNECOM headquarters on Earth to their plight, but they hit the ground before they can send their co-ordinates, and their transmission cuts out. While Scooter works to repair the radio, Nick goes off to explore the planet, which is environmentally and geographically akin to a prehistoric version of Earth. Unfortunately, that means it has "dinosaurs" of a kind as well, and Nick soon finds himself being chased by a huge, three-headed lizard-monster! He runs back to the Command Center, but this only results in the creature attacking and absolutely wrecking the vessel before turning its attention back to Nick and Scooter. Scooter switches to vehicle mode to carry Nick to safety, but the beast chases them off a cliff and they plummet into an alien tar pit below. 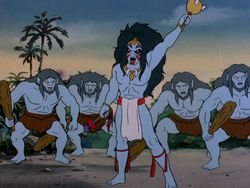 Back on Earth, Scooter and Nick's allies are worried about them. Deducing that they would need to find an Earth-like planet in order for Nick to survive, Leader-1 scans the Omega Prima system for such a world. Identifying the only world in the system capable of sustaining human life, the team blasts off aboard their Command Center.

Meanwhile, Cy-Kill, Crasher, Cop-Tur, and the Monster GoBots skim over the surface of the prehistoric world in Thruster, searching for the fallen Command Center to make sure Scooter and Nick are no more. They find the wreck, but upon discovering it to be empty, the villains split up to search for their quarry. 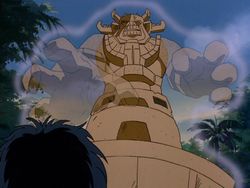 At Nick's suggestion, Scooter uses his utility energy beam to knock down an overhanging tree branch, with which he is able to haul himself and his friend out of the tar pit. As soon as they are back on solid ground, however, a new danger presents itself: a tribe of blue-skinned alien "cavemen"! With Scooter unable to transform thanks to the tar gumming up his systems, the pair hot-foot it into the jungle, but immediately become entangled in some living creeper vines and are captured by the cavemen. From the air, Cop-Tur spots the pair being trooped through the jungle back to the caveman temple; he informs the other Renegades, who gather to watch from afar as the cavemen place Scooter and Nick on a crystal "pyre" so that they may be sacrificed to a stone idol of their demonic deity. Though the crystals sap their strength, they are able to effect an escape when Scooter distracts the primitives by projecting a hologram that makes it appear as if the idol has come to life. 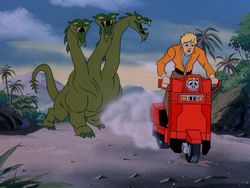 The Renegades try to take matters into their own hands, but when they approach the temple, the cavemen attack them. The Renegades easily beat them back, of course, but the scuffle buys Scooter and Nick time to escape into the jungle. The Renegades pursue them, but just as they catch up to them, the other Guardians arrive. Battle quickly breaks out, with the Guardians taking advantage of the natural dangers of the planet—Leader-1 blasting Cy-Kill back into some of the living vines, Turbo kicking Crasher into a tar pit—but the heroes are too outnumbered to take the upper hand, and things don't look good. Spotting the three-headed alien dinosaur from before, Nick and Scooter catch its attention and lure it toward the battle. The Renegades turn their firepower on the stampeding creature, but when their blasts have no effect they are forced to retreat. Subsequently, the Guardians call in a fleet of Command Centers from GoBotron and, using the information obtained by Scooter, target and destroy the Renegades' new base. Victorious, they return to Earth... unaware that they leave behind a forever-changed tribe of cavemen, who now worship at the feet of a statue of Leader-1! 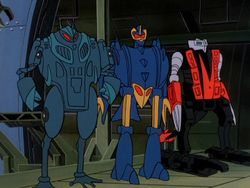 Scorp: "We live to obey, Cy-Kill!"
Vamp: "They are food!
Pincher: "We'll bring back their components, Cy-Kill... piece by piece!"

—The Monster GoBots are a pleasant bunch

(Caveman leader speaks unintelligible language)
"Wh-what's he saying?"
"Probably something about meet the rest of his attractive friends!" 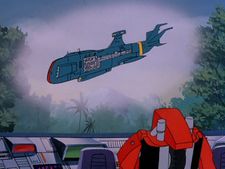 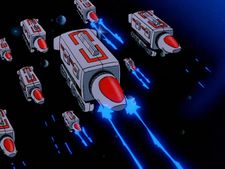 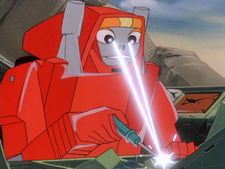 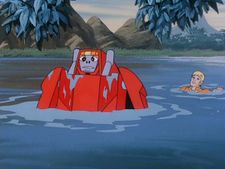 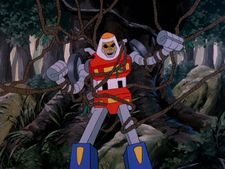