Eagle Fighter is a Guardian and a member of the Dancougar combiner team. 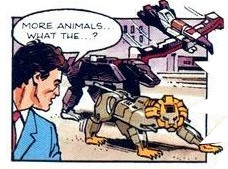 After chasing away Traitor, Mammouth combined with his team-mates to form Dancougar. Which was good timing, as the evil Bismarck was lying in the street in front of them. The Renegade transformed before the pair began exchanging blows and insults.Challenge of the GoBots - A Robo Machine Product

Eagle Fighter was released in Europe by Bandai as part of the Robo Machine Dancougar set in 1986, and could convert from eagle to robot. The toy was originally released as the Eagle Fighter module of the DX version of Dancouga in Chogokin. The four included robots - Eagle Fighter, Mammouth, Land Ligar and Black Cougar - could combine to form Dancougar.