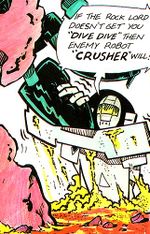 Crusher is a Renegade. Which one is less clear.

The Australian Army attempted to end the threat of the Enemy Robots by nuking a city but only succeeded in instead awakening the Rock Lords below Earth's crust. Some of them began attacking the Friendly Robots but others helped, only intensifying the battle. Dive-Dive was attacked by Magmar but the latter was restrained by Bolder - however, Dive-Dive's troubles weren't over as Crusher smashed through the ground to grab his leg. Before the battle could develop any further everyone was terrified by the arrival of a Narlie. Challenge of the Machine Men