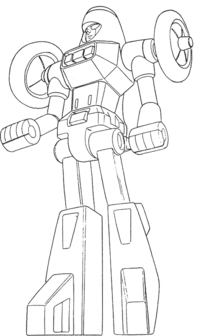 Bike Robo was driving along when a Dogra alien attacked him from above. He jumped above the aggressor's blasts, flipped into robot mode and destroyed it. Bike Robo instructions

The cartoons featured multiple versions of Bike Robo; for the sake of convenience all are listed here

Bike Robo was among the earliest students of Kirai Stol on Cronos, and after his training joined the Machine Robo army at Emerald City. Attack, Land Commander 5! He later helped the Wheelmen by driving to Vira to fetch Metal Laster after Hot Rod Joe and F-One Jack were heavily damaged by acid rain. Full Power, Wheelmen! Another Bike Robo was racing with Scooter Robo in Under Cronos before both were scolded by Police Car Robo. Legend of the Elmedia Hero A different Bike Robo later competed in the race at Devil's Island but was an early retirement when Vanishing Harry barged Double-decker Bus Robo into his path. Run Through the Race of Death! 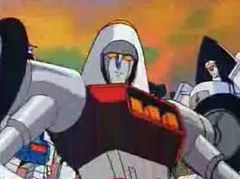 Bike Robo became part of the Land Commander 5 team at Emerald City. Gather All Machine Robo Like the rest of the Land Commander 5 team, Bike Robo initially held an aloof attitude towards Rom Stol, Blue Jet, Rod Drill, Triple Jim and Leina Stol. However as the battle against the Gyandlar went on he became less arrogant, even getting injured protecting Leina. After driving off the Gyandlar, he apologised to the travellers for his arrogance before being taken away for repairs. Attack, Land Commander 5! He recovered to rejoin the team when they helped thwart Garudi's attempt to melt the frozen lake that neighboured Emerald City and flood the city. Cross Rock's Great Prophecy When Rom led an expedition to fetch Metal Laster from Vira, Bike Robo and the Land Commander 5 team took over command of the city's defence in his absence. Knight of the Devil's Mountain, Mask Rock When Garudi sneaked Gyandlar troops past their defences in Tough Trailer, Bike Robo and his team-mates helped the defence of the city. 10 Seconds Before the Explosion! Run, Tough Trailer! He later aided the search for Leina, Rod, Tough Trailer and Pro Truck Racer when they were lost behind Gyandlar lines. Fire! Big Blazer Cannon! After the Machine Robo shifted operations to the Battle Base the experienced Bike Robo was put in charge of training the troops to man its' many stations The Secret of the Jewel People, later reorganising the Land Commander 5 team so the places of himself, Jeep Robo and Police Car Robo were taken over by Missile Tank Robo, Fire Robo and Porsche Robo, freeing them up for other duties on the Battle Base. Close Call, Land Commander 5! 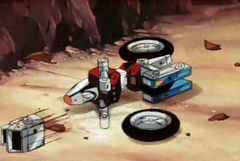 As the Wheelmen owed him a favour Bike Robo was able to persuade the smugglers into helping the Machine Robo by retrieving volatile explosives from Cleo City. After F-One Jack feigned injury in order to meet with the pair's Gyandlar handlers, with Rom and Pro Truck Racer staying behind, Bike Robo continued to race to the Battle Base with Hot Rod Joe. Garudi fired heat-seeking missiles at them and Bike Robo drew them off, albeit getting heavily damaged, to ensure the success of the mission. Full Power, Wheelmen! He recovered to join the Machine Robo's assault on the Gyandlar mothership Power Riser, Break Through the Enemy! and joined the bulk of the army in pouring into the ship after the Battle Base, Gattai Saurer, Rockdon and Rockgiran were able to smash through the ship's hull. Mighty Fortress, Heavenly Sword - Jet Don't Die! Bike Robo survived the events of the battle and subsequently left Cronos onboard a ship bound for a dimensional gateway above the planet. The Final Battle of Cronos 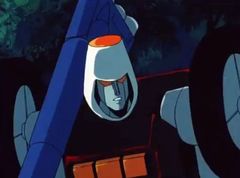 After the Machine Robo left Cronos and passed a dimensional gateway they re-emerged as the citizens of the Algo Republic on Electronic Planet B-1 with no memory of their previous adventures; Bike Robo became a member of the Silver Wolves in the Algo Army. He was among the troops who scrambled along with Pro Truck Racer to investigate the arrival of the Good Luck when it landed on the planet. Burning Electronic Planet He and Combat Buggy were manning cannon in the battle when they were bombed by Gurendos. Jet Riser! Scramble! Bike Robo was later among the troops gathered by Rod Drill to attack the Gurendos Strongest Warrior - R.JeTan! but they got pinned down when the traitors Kizune and Gantsuke leaked the strategy. Crystal Eavesdropping Strategy Bike Robo was later part of the team led by Rod Drill to tackle a new Gurendos super-gun, though ultimately only the Winner Robo were able to evade security and destroy the weapon. Dangerous Grand Whale He joined Rod Drill again when the Silver Wolves set out to back up the Battle Hackers; however, he struck a mine on the way. While he survived it meant the group couldn't aid R. JeTan's troops. R. JeTan! Run! After repairs, Bike Robo later took part in a coordinated Algo Army counter-offensive, which was ultimately successful. Quickly, Gattai Saurer! He fought in the Algo Army's forest during an attempt to stop a Gurendos offensive. Riser! Power Up! Bike Robo was one of the Algo Army soldiers guarding their electromagnetic missiles but was unable to prevent Yasand from stealing them. The Stolen Secret Weapon He was struck by one of the missiles Target: Grand Whale but later repaired and rejoined the Algo Army for a counter-attack that drove the Gurendos away from the edge of Crystal City. Let's Do It! Bike Robo was onboard the Grand Whale when RIM took the base in to attack the Gurendos' Blood Country base. Goodbye - Battle Forever 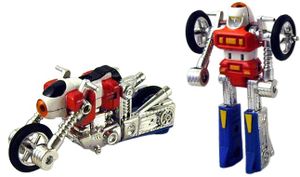 Bike Robo was the first figure released in Popy's Machine Robo Series and the Machine Robo franchise as a whole. He transforms from robot to futuristic motorcycle. Unlike the majority of Machine Robo figures, Bike Robo requires partsforming, as his wheels move to his shoulders and his engine block is removed when converting to robot mode. Due to this, the rubber tires, the extensive chrome detailing (even simply moving his arms causes chrome to rub off in the shoulder joint), and the easily-lost knee stickers, loose Bike Robo figures are often found incomplete or damaged. Like the rest of the range, the figure retailed at ¥600. 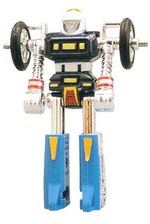 Bike Robo was recoloured for the Machine Robo Best 5 Special Series giftset, now featuring black paint in place of the red of the first release. This version of the figure was exclusive to the Japanese market. 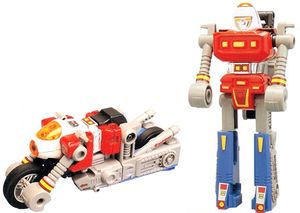 Big Bike Robo was an upscaled version of Bike Robo as part of the Big Machine Robo Series. The toy featured a revised transformation that negated the need for partsforming by having the bike's engine and wheels turn into a large backpack, albeit at the cost of the robot losing its' distinctive shoulder-mounted wheels, and is considerably sturdier. However, the handlebars can still snap.

The American release of the original Bike Robo was renamed Cycle Man and featured no changes from the Japanese release.

Bike Robo was reissued for the Machine Robo: Revenge of Cronos toyline in updated packaging. The figure was assigned to the Battle Tribe and featured no changes from the original Japanese release.

Released as the first figure in Action Toys' Machine Robo: Revenge of Cronos toyline, Bike Robo converts from futuristic motorcycle to robot. The figure features a mix of plastic and diecast, and is closely based on the character's appearance in the Machine Robo: Revenge of Cronos cartoon. Bike Robo has movement at the neck (albeit restricted slightly by the head's cowl) shoulders, elbows, wrists, waist, hips, knees and ankles. While the toy still has separate wheels the engine is now an integrated part of the figure, forming from the inner calves of the robot. He comes with an axe that the robot can wield, though the reasons behind this decision are obscure as neither the toys nor the anime character have used such a weapon. The bike's handlebars are removable to make the robot mode more cartoon-accurate; they can be clipped to the back of the feet in robot mode if required. As well as the standard multi-part stand included with all of the toys in the series, Bike Robo includes a kickstand to aid display of the toy in motorcycle mode. 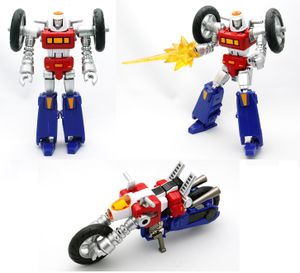 Released as the first figure in Action Toys' DX Machine Robo: Revenge of Cronos series, Bike Robo converts from futuristic motorcycle to robot. The figure features a mix of plastic and diecast, and takes a lot of engineering cues from the smaller figure, while also learning several lessons. The blue on the character's legs is notably darker than on the standard version, something likely done to increase the figure's resemblance to media depictions of the Western counterpart Cy-Kill - among the many accessories included with the figure are an interchangeable face modelled on the Renegade's Challenge of the GoBots character model and a sculpted translucent energy blast that clips over the hand similar to the hand-blasters used by GoBots in the American series. 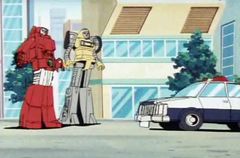